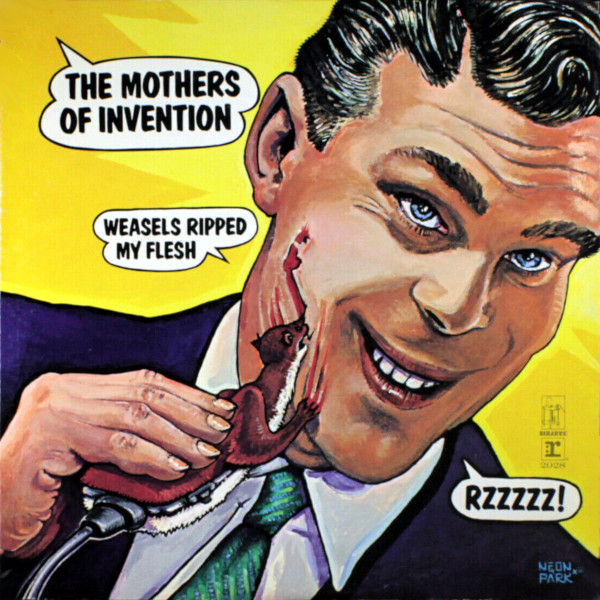 A Frankenstein feast of tasty leftovers and live tracks from the band what brought you Lumpy Gravy, Uncle Meat and Burnt Weeny Sandwich.

A collection of live and studio recordings from the “difficult” years of 1967, 1968 and 1969 that didn’t make it onto the proper albums Lumpy Gravy, Uncle Meat, Burnt Weeny Sandwich et al. Frank Zappa makes a meal out of these leftovers; in fact, it’s easy to approach this as the next new Mothers record, since it’s very similar in construction and quality to Burnt Weeny Sandwich. You’ll encounter tantalizing melodies in complex classical/jazz arrangements, avant-garde experiments (e.g., “music” scored for laughter, howls and nose), smart send-ups of contemporary popular music and relatively normal blues/rock songs delivered with fire and precision. In other words, more or less the same fare as Weeny, with the caveat that nothing on Weasels is quite as clever as “Holiday In Berlin” or “Little House I Used To Live In.”

In another universe, these might have ended up as outtakes added to the late-century parade of Zappa/Mothers remasters. One can envision “Oh No” as a perfect addendum to We’re Only In It For The Money, if one is inclined to envision such minute details of an alternate future at all (one would think not), or “Didja Get Any Onya” as a detour during Weeny’s “Holiday In Berlin.” Over the long and langorous years, snippets of Weasels have popped up in my mental radio as much as the other Mothers recordings, and I find myself on strange occasions silently mouthing “My Guitar Wants To Kill Your Mama” or reconstituting one of its cacophonous passages from dried memory. Weasels does feature a good amount of calculated noise (albeit meticulously scored), which can feel like having your brain poked with a stick for forty minutes if you’re not inclined toward the avant-garde.

All songs written and conducted by Frank Zappa unless noted.