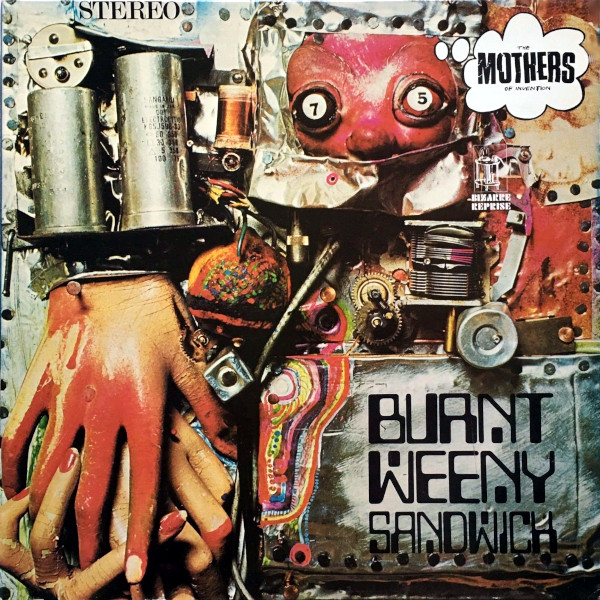 Avant-garde, quasi-orchestral music bookended by a pair of doo-wop songs, which in the world of Frank Zappa makes perfect nonsense.

Kronomyth 8.0: The furter adventures of Frank.

A mishmash of musical grotesqueries, or yet another example of Frank Zappa’s calculated dementia as art? I’m not asking you to decide, since Burnt Weeny Sandwich is probably both. It starts off innocently enough with the Cruising-speed “WPLJ” and closes with another disarming doo-wop send-up in “Valarie,” but it’s what’s in the middle of Burnt Weeny Sandwich that merits attention. Quasi-orchestral lounge music, searing guitar solos, classical jazz, dissonance, deliberate destruction of music’s smooth facade. This is “serious” music filtered through Zappa’s unique sense of humor, iconoclasm on a surprisingly intimate scale. Selections like “Holiday In Berlin, Full Blown” and “Little House I Used To Live In” belong with most of Hot Rats in the hall of great instrumental moments. But where Rats was focused more on jazz/rock fusion, Weeny fuses together the wildly divergent aspects of Frank’s muse into a complex stew (Weasels would repeat this experiment).

Underneath the chaotic haze, great ideas are afoot. “Theme From Burnt Weeny Sandwich” and the brief “Ivor’s Boogie, Phase One” are carefully contrived to combine ugliness and art, the band on the verge of careening off the printed score into noisy oblivion, riveting the listener like a high-speed car chase where we wait breathlessly for the inevitable crash. Not being familiar with Lumpy Gravy or Uncle Meat, the Mothers’ most avant-garde outings to date, I can’t tell you where Burnt Weeny begins and they end. According to Zappa’s project/object theory, this clearly belongs to the same object as Weasels Ripped My Flesh and perhaps to Hot Rats as well, forming at least a contiguous trio of orchestral/jazz/rock efforts that put Zappa’s compositional genius to the test. The Flo & Eddie follies effectively ended this chapter, only to have it resurrected by (in part) by 200 Motels, Waka/Jawaka and The Grand Wazoo. From these two trios come some of Zappa’s most brilliant and ambitious music, with Burnt Weeny in the top half of that group, and thus one of Zappa’s essential recordings.

All songs by Frank Zappa unless noted.