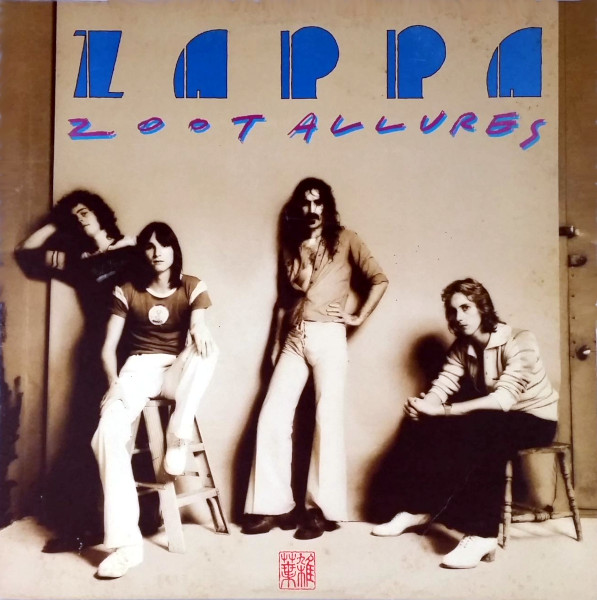 Guitar, bass, keyboards… Zappa does it all (over you) on his latest studio album.

Zoot Allures introduced what would become familiar themes for Frank Zappa over the next decade: lascivious subject matter, social satire aimed at the disco generation, and blistering guitar showcases served atop arrangements of revved-up jazz/funk. Honestly, this mostly DIY effort is one of the least interesting chapters in Frank’s discography, save maybe for the endless guitar solos made available in the twilight of his career (shut up and pay me the money).

Of course there are flashes of brilliance, like the drugged-out Dalek distortion on Frank’s guitar in “Black Napkins” or the neatly conceived narrative of “Wonderful Wino” (foreshadowing the succinct and splendid Joe’s Garage). But there are missteps, wide ones, like the endless nonsense of “The Torture Never Stops” or the shrill “Disco Boy” (the album’s second single, following the sleepy but pleasant “Find Her Finer”). Frank would soon finetune the sexual innuendo; “Ms. Pinky” is already funny, but songs like “Jewish Princess” and “Crew Slut” suggest a refinement of the sleaze factor that functions better in Zappa’s musical milieu. I’d also slip the opening “Wind Up Workin’ In A Gas Station” into the plus column, since it’s one of the earliest examples of the complicated funk arrangements that would become a Zappa hallmark (“Fine Girl,” “No Not Now,” etc.).

It’s hard to believe that the sublime “Zoot Allures” (featuring the sort of tuned-down whammy distortion that Adrian Belew would soon appropriate for himself) and the puerile “Disco Boy” were aimed at the same audience, but then Zappa always had cultivated a childish, self-destructive element in his art. Zoot Allures remains popular with many fans, but it’s disheartening to hear Zappa assume the persona of the prince of potty jokes, in effect abdicating one throne for another.

All selections written by Frank Zappa unless noted.

Photography by Gary Heery. (And, yes, that really is Eddie Jobson on the album cover, even though he doesn’t play on the album. Go figure…) Design by Cal Schenkel.