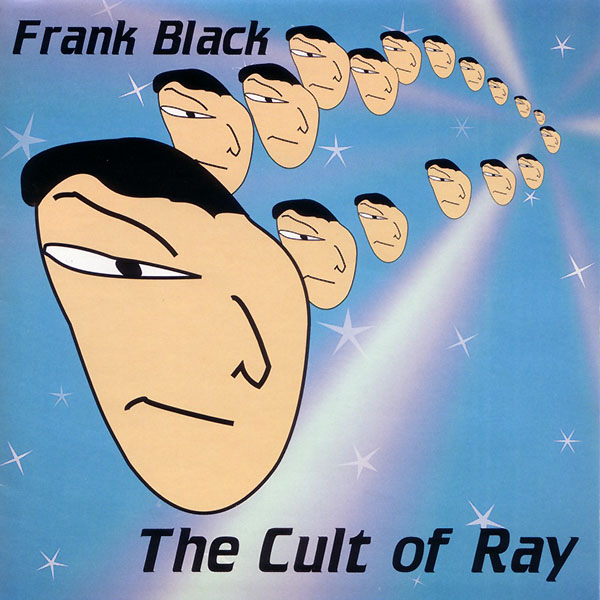 If you’re already a member of the cult, this’ll keep the flame burning until the next album arrives.

This is the first Frank Black album I ever bought and, while I liked it, I wasn’t a member of the Black cult yet, so I didn’t “get” how good a lot of this was. I compared it to Pixies. I compared it to Bob Mould/Sugar. I compared it to Paul Westerberg. And I came away with the impression that Black had bested them by a little, but the album didn’t excite me the way Doolittle did.

Then I heard Frank Black and Teenager of the Year, and those albums either make a believer out of you or they don’t. Me, I believed. I believed Frank Black was a genius. I believed that Pixies dying wasn’t a bad thing if it meant having “Los Angeles,” “Abstract Plain” and “Headache” to hold. And so, when The Cult of Ray comes into view now, I see it as a continuation of all the goodness that came before.

The album contains only thirteen tracks, which would be a lot for anyone else but seems a little stingy for Frank Black. The Marsist is a good noisy opener; no “Pong” but no pauper either. Men In Black is one of the two ringers on The Cult of Ray, and remains one of my favorite Black tracks. Punk Rock City is typical of Black’s brood: heavy and effortless and inscrutable and cool. You Ain’t Me actually sounds like Thin Lizzy (Black has such eclectic taste that it’s not as crazy as it sounds); Lyle Workman does a nice job on the guitar solo, but I miss the weirdness that Joey Santiago and Eric Drew Feldman brought into the music. Jesus Was Right taps into Black’s affection for 50s rock & roll but updates it for the skater age.

“Headache” gave Black a taste of success, and he returns to the scene of the crime for I Don’t Want To Hurt You (Every Single Time), which is even sweeter. The instrumental Mosh, Don’t Pass The Guy removes the aftertaste of commercial pandering, and it’s on to the kind of weird love song you’d expect from the Pixies frontman, Kicked In The Taco. The Creature Crawling is cool and slinky like the snake it references; it wouldn’t be the last time that Black wrote a song about snakes, which is probably a rolled donut shy of meaning something.

The Adventure And The Resolution is the record’s second instrumental, and it’s here that you begin wondering if Black weren’t struggling to come up with new ideas. (The expanded edition, by the way, dispels such a foolish notion.) Black tends to put the best songs up front, and Dance War bears that out, but it’s strange to find the album’s title track near the end. The Cult of Ray isn’t the first, second or third best song on the album, but it is fun. The Last Stand of Shazeb Andleeb, on the other hand, is anything but. Based on the death of a Pakistani teenager in a California high school, it’s a rare case of Black reaching for a deeper meaning than his own experiences.

Up to this point, I’d tell you to buy the Frank Black albums in the order he made them. Teenager of the Year is better than his debut, but I think you need the first album to understand how he arrived at TOTY. The Cult of Ray is a continuation, but not a foundational stone in the church of Black. You do need to hear “Men in Black” and “I Don’t Want To Hurt You,” though (YouTube, I’m looking at you.)

All songs written by Frank Black.

Limited edition bonus compact disc EP
1. Village of the Sun
2. Baby, That’s Art
3. Everybody Got The Beat
4. Can I Get A Witness