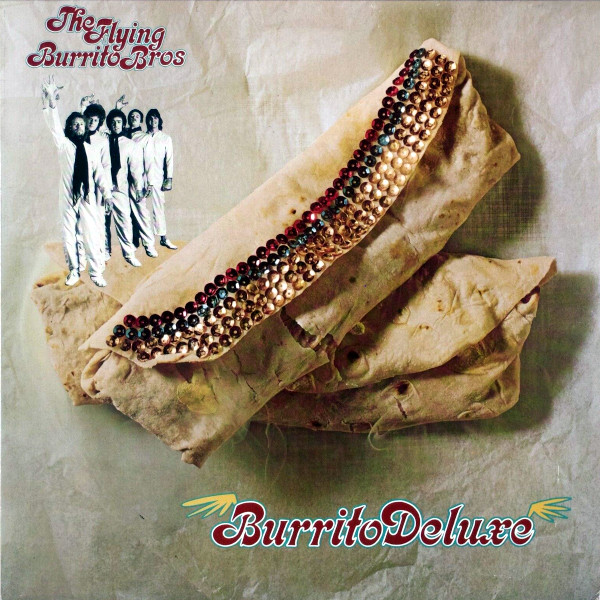 A brighter, bouncier Burrito this time, without the psychedelic pedal to the metal.

Kronomyth 2.0: The gilded pouches of beans.

Despite the short passage of time, Burrito Deluxe is a different record than its predecessor, The Gilded Palace of Sin. For starters, the freestylin’ and psychedelic pedal steel of Sneeky Pete is noticeably restrained this time. The band’s second album is also much brighter and bouncier than their first. Oh, yeah, and Bernie Leadon has now replaced Chris Ethridge, which brings another voice into the mix. The vocal harmonies on this album are one of its most endearing features.

I really like this record, maybe even more than their first, but again I’m not a trustworthy source where country-rock is concerned. The facts that Older Guys sounds like The Monkees or that Man in the Fog features both the tuba and accordion are pluses to me. Which isn’t to say that the band’s country-rock songs don’t blow by like a cool breeze. Their versions of Image of Me and Farther Along are terrific, and the Leadon original, God’s Own Singer, sounds like a classic in the making.

Oddly, the band’s second album didn’t chart. Choosing Cody, Cody as the single probably didn’t help. It’s a great song, perhaps as close as they’d come yet to sounding like The Byrds, but too subtle for the radio. The rollicking “Older Guys” probably would have been the better choice. Or their version of Wild Horses, which makes its first appearance here. Six minutes long or not, it’s a fantastic song. Their take on Bob Dylan’s If You Gotta Go, on the other hand, is their attempt at fixing something that wasn’t broke.

I guess the future didn’t depend on Burrito Deluxe, and maybe that’s why critics tend to give it a colder reception. It’s a really good record, though, and continues to make the case for shifting your attention from The Byrds to The Flying Burrito Bros. Given the fact that Chris Hillman fired Gram Parsons from the band before their next album, a third course may not be in order, but you’ll definitely be wanting this second helping.