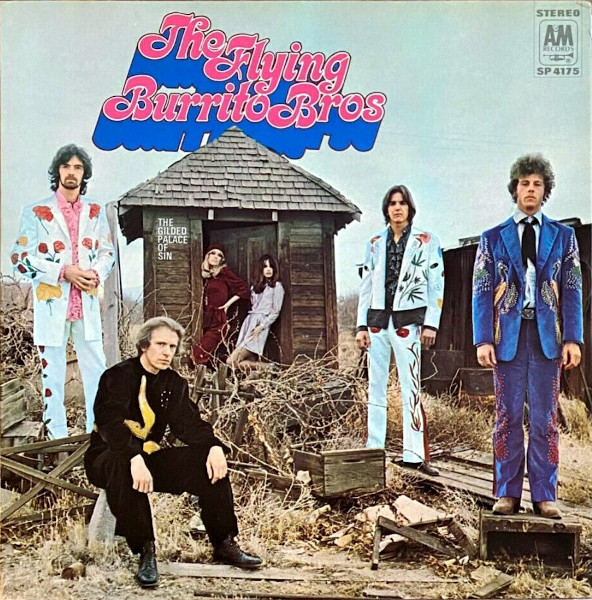 A groundbreaking mix of country, rock, soul and psychedelic slide guitar that kicked off the country-rock era in earnest.

So much has been written about this album already that my two cents are meaningless. Besides, my interests lie mostly in the province of discographical data. But, since I’ve developed the habit of writing something about each album, you can consider the following more compulsion than criticism. I happen to agree with the opinion that The Gilded Palace of Sin is a landmark record. Whether or not it influenced the country-rock music that immediately followed (Nashville Skyline, Workingman’s Dead), I couldn’t tell you. It most certainly influenced bands like New Riders of the Purple Sage and Eagles.

The Flying Burrito Bros, as you surely know, emerged from the ashes of a partly burned Byrds. Sweetheart of the Rodeo, their last album, is often cited as one of the first country-rock records. The Gilded Palace of Sin is even sweeter, mixing the gorgeous vocal harmonies of Gram Parsons and Chris Hillman with Sneeky Pete’s steel guitar. Although he doesn’t receive any songwriting credits, Pete Kleinow’s steel guitar is stamped all over this music; take his steel guitar out of the equation, and no one would still be talking about this album.

Where Sweetheart sounded dry and a bit sour at times, The Gilded Palace of Sin is kissed by a confectioner’s touch. Like the psychedelic cowboy suits that adorn the band, the band mixes country and psychedelic rock in a way that feels both authentic and completely original. The amazing thing about this record isn’t that they thought to mix the two genres, but that they’re constantly remixing it and adding new things along the way. The unfortunately titled Hot Burrito #1 and Hot Burrito #2, for example, bring elements of 60s pop and soul into the mix. I would have mistaken “Hot Burrito #2” for an early Todd Rundgren song.

There isn’t a bad song on the entire album. Christine’s Tune, Sin City (which Hillman has cited as his favorite Burritos track), Wheels, Dark End of the Street (my personal favorite), My Uncle—any one of those is a textbook testimony of why country and rock should be married. Even the closing tale of a hippie and a straight walking together, Hippie Boy, is important as an allegory for what the band was trying to do.

There are a lot of reasons why this album didn’t take the world by storm when it was released. First, I’m not sure the world was ready for Gram Parsons. Rock radio stations certainly weren’t ready to play country music, and I have to believe that country radio stations had their own reservations about playing country music with psychedelic fuzz-guitar solos. Also, it was hard to take the band and their music seriously with such a silly name. For what it’s worth, I am not a fan of country-rock and I think this album is awesome. Maybe that’s its biggest obstacle to success: it’s the wrong music for the wrong audience that, in spite of itself, does everything right.

Art direction by Tom Wilkes and the boys in graphics, Michael Vosse. Photography by Barry Feinstein.