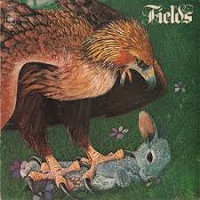 Kronomyth 1.0: EMERSON LAKE EMBALMER. Those who followed Rare Bird after their second album found themselves in the bewilderedness of Epic Forest when, in fact, they should have pursued the outstanding Fields instead. Fields was conceived as a post-ELP power trio featuring Graham Field (here credited as the author of “Sympathy”) and a pair of peripheral Crimsonites, Andy McCulloch and Alan Barry. Their first, eponymous album picks up where As Your Mind Flies By left off, and adds elements of ELP and Yes to the mix while favoring shorter song structures. The explosive opening, “A Friend of Mine,” is fair warning that big things are afoot in Fields. Yet, by sticking to a conventional four-minute song format, the band would seem to thwart their own epic designs. There are isolated moments of brilliant flash on songs like “Over And Over Again” and clever ideas tucked away on “While The Sun Still Shines” and “Feeling Free,” but as soon as an idea gets interesting, it seems like it’s over and Fields is on to the next thing (e.g., minstrelsy, organ interludes). McCulloch and Barry are a considerable improvement over Rare Bird’s rhythm section, and you have the sense that Graham Field didn’t leave his former band for creative differences so much as the opportunity to create more complex music. And while Fields is intricate at times, it tends to topple over on itself. As a progressive rock sampler, this is definitely a tasty debut and worthy of its semi-cult status among progsnobs. It is not, however, an opus on the scale of Tarkus or The Yes Album, although after you’ve exhausted the albums of The Nice in pursuit of a second ‘ELPing this would be a logical next step.

All songs written by Graham Field unless noted.