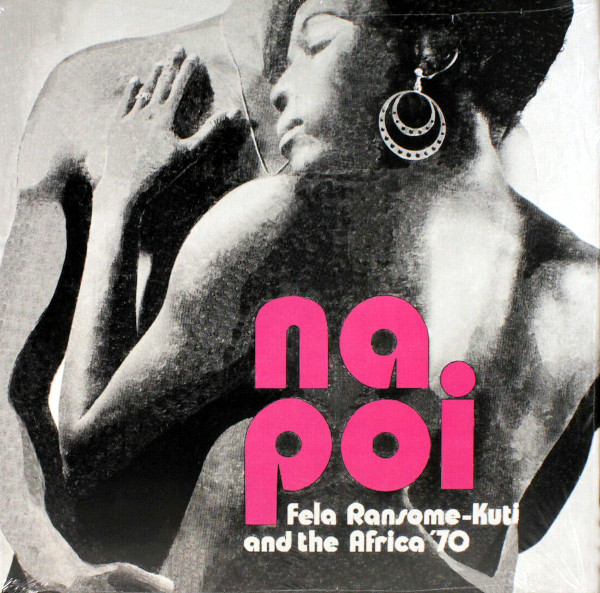 Songs about sex and death, this isn’t his most enduring work, but Fela and the band show plenty of endurance all the same.

Na Poi is basically Fela’s attempt to set the act of making love to music. It starts out with a simple riff and a spoken intro that Fela refers to as “talk talk chorus,” then expands the riff into a full-blown groove complete with the usual horns, drums and bass. The song is basically one long, extended groove that changes very little over the course of twenty-five minutes; Fela’s future wives (all 27 of them) could only hope that Fela was more imaginative behind closed doors, although the song’s stamina boded well. Fela would revisit the song over the years in several versions. I’m not sure why; it’s not one of his better ideas, but maybe the salacious nature of the song appealed to him.

The original album also included You No Go Die… Unless, which is in line with the better music from this period: strong groove, powerful singing, complex horn charts and lots of music crammed into the crevices. The song echoes a personal philosophy of Kuti’s that his destiny and death were in his own hands, which could be seen as an active challenge against a Nigerian government that might have it otherwise. Fela Kuti has released dozens of records, and Na Poi wouldn’t make my list of his best dozen efforts (it might top the list of his dirty dozen).

While Kuti expected a lot from his band, he wasn’t a perfectionist as a producer. Na Poi feels like it was recorded live in a single take (which was probably the case); in fact, I wouldn’t be surprised if there aren’t bootlegs around from the period that sound as good. You could argue that a celebration of sex (Na Poi) and death-defiance (“You No Go Die… Unless”) are quintessential themes for Kuti, but Na Poi is not one of his most essential recordings. [Note: Some of the re-issue information below may pertain to later recordings of Na Poi; hopefully, I’ll sort all that out in the coming months.]

All songs written by Fela Ransome-Kuti.