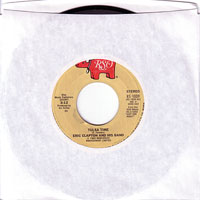 Kronomyth 9.1 TOKYO TIME. Eric used to open this song with a dedication to his Tulsan backing band, but that was then and this was a few months later with a completely different and English band. Unlike the Don Williams’ version, which is more of a pure country song, Clapton’s version of “Tulsa Time” sounds like a Chuck Berry cover. (Clapton also includes the words “damn” in his version.) Despite the new band, there’s no big difference between this version, previous live versions or the original version that appeared on Backless. The single version of “Tulsa Time” is shorter than the elpee version on Just One Night; the flip side version of “Cocaine” significantly so. Recorded in Japan, where “Cocaine” was released as a single, the audience clearly relishes the performance. The solo on “Cocaine” is especially interesting, with Clapton getting a talk box effect from his pedals.