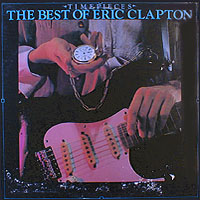 Kronomyth 11.0: REHAB, RINSE, REPEAT. In 1982, Clapton entered rehab and into a new contract with Warner Bros., prompting RSO to release this “greatest hits” compilation. I put those words in quotation marks because, really, what RSO has assembled here are Clapton’s greatest covers: “I Shot The Sheriff,” “Cocaine,” “After Midnight,” “Knockin’ On Heaven’s Door,” “Promises.” Also included are “Swing Low Sweet Chariot” and “Willie And The Hand Jive,” two songs that few consider among Clapton’s most timeless recordings. Certainly, RSO had a profit in mind when they assembled Time Pieces, but you can’t help but wonder if there weren’t a little revenge here at work as well. At the time of its release, this was the lowest charting of Clapton’s official U.S. releases, but over the years steadily increasing sales have made it one of his biggest-selling records in the U.S. (only Unplugged has sold more copies). The album has its shortcomings—too few tracks, choosing the live version of “Cocaine” over the superior studio version, leaving out “I Can’t Stand It” and “Let It Rain”—which subsequent releases partially addressed by adding one more track, “Let It Grow.” Since that’s about all I have to say on the matter, I’ll spend a moment on the Legend of Blackie, the guitar depicted on the front and back cover of this album (I say “depicted” because it’s unlikely that Clapton lent his famous black Stratocaster or less-famous Gibson Memphis to RSO for the album cover shoot). For those unfamiliar with the tale, Clapton bought six 1950s-era Stratocasters in a Nashville music shop (Sho-Bud), gifting three of them to George Harrison, Pete Townsend and Steve Winwood. The remaining three were re-assembled by a Nashville-based luthier into a single guitar, dubbed Blackie (joining his earlier sunburst-finish Strat, Brownie). Blackie debuted on The Rainbow Concerts and remained an integral part of Clapton’s career until the mid Eighties. It was eventually auctioned off in 2004 to Guitar Center for a little under $1 million in a charity event to fund Clapton’s newly opened rehab facility in Antigua, the Crossroads Centre. The whole thing always struck me as a sort of samurai tale of rock and roll, starring The Six and the Three That Became One. Or maybe I just have way too much time on my hands.

The Pictures
Art direction and design by Bill Smith. Photography by Gererd Mankowitz. At the time (1982), Mankowitz was enjoying his first major exhibition at The Photographer’s Gallery in London.