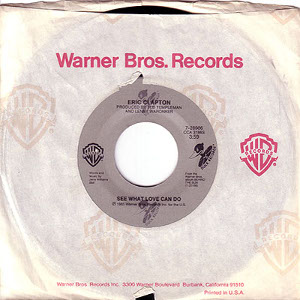 Kronomyth 13.2: LOVE IS NOT FOREVER. When Warner Bros. pushed Clapton to record some new tracks for Behind The Sun with their own producers, Eric pushed back by telling WB to provide the songs as well. Enter Jerry Lynn Williams, a Texas songwriter who furnished Clapton with two readymade hits: “Forever Man” and “See What Love Can Do.” I’ve always felt that Clapton got this song wrong; it’s really a hopeful song about the power of love, but Clapton sings it with a world-weary sadness. The lyrics actually anticipate the sentiment of Live Aid, but Clapton and Collins opted for a rendition of “She’s Waiting” instead. You can’t blame them, since it’s the better song; in fact, time has forgotten that it was “See What Love Can Do” and not “She’s Waiting” that charted. Warner Bros. may have had as much in mind, as they shaved almost a minute from “She’s Waiting” (including that annoying ending), making it more palatable to radio play.

Back-to-Back Hits 7-inch single reissue
A1. See What Love Can Do
B1. Forever Man

The Word
Jerry Williams’ financial troubles bring to mind this quote from Matthew 6:19-20: “Do not lay up for yourselves treasures on earth, where moth and rust destroy and where thieves break in and steal, but lay up for yourselves treasures in heaven, where neither moth nor rust destroys and where thieves do not break in and steal.”