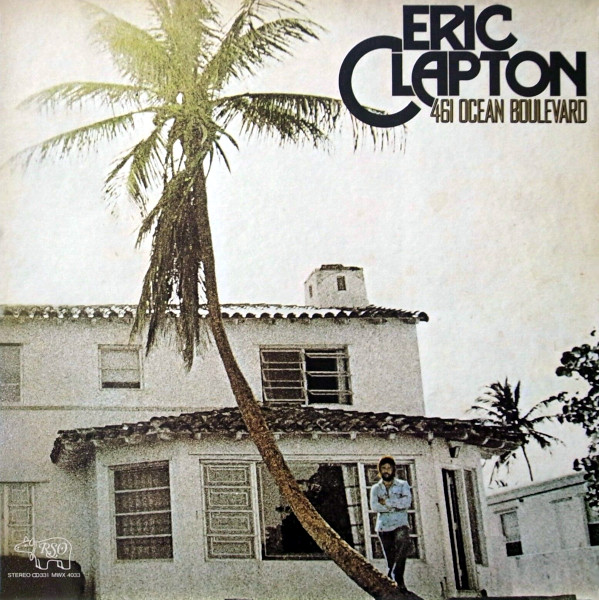 Clapton emerges from the shadow of a heroin addiction with his strongest album since Layla.

Eric Clapton’s “comeback” album (Rainbow Concert being a rushed, if impressive, affair) finds our fallen hero in a hot climate (Miami) with an even hotter backing band that included a trio of Tulsans, a local guitarist and a record mogul’s girlfriend. 461 Ocean Boulevard, so named for the house where Clapton stayed during the recording, is quintessential Clapton. It marks the emergence of what would later be called the “Tulsa Sound,” a shuffling mix of guitars, organs, bass and drums that rode steady like a reliable pickup truck; it wasn’t flashy, but it was a remarkably smooth ride all the same.

For an enigmatic artist like Eric Clapton, it seems only fitting that his best album would have its share of enigmas. The album’s biggest hit, a cover of Bob Marley’s “I Shot The Sheriff,” is a song Clapton was reluctant to cover. Of the few original songs, “Give Me Strength” was later found to be a cover and “Let It Grow” bears a noticeable similarity to both “Stairway To Heaven” and “Dream On.” The record closes with a track written by George Terry that sounds nothing like the rest of the album. You could argue that the material has almost nothing to do with the man, yet it’s in the singing and the playing that Clapton’s genius comes to light.

On subsequent albums, Yvonne Elliman (and, later, Marcy Levy) would be brought up in the mix to offset Clapton’s creaky and often sleepy vocals. On 461 Ocean Boulevard, he does most of the singing and, in fact, does a pretty fine job of it as blues guitarists go. Like a quiet talker, the listener ends up paying closer attention to Clapton’s voice; had he oversung “Willie And The Hand Jive” or “Give Me Strength,” they wouldn’t be nearly so compelling.

I have to tell you that “Motherless Children” might be my favorite opening on an Eric Clapton album. It leaps out of the speakers with a barely contained energy that feels as though the band has strapped a rocket onto an old blues song, which is almost exactly what they did. Steve Miller Band had covered this song on Your Saving Grace, but Clapton’s version is a revelation. The next track, “Give Me Strength,” burns with a quiet intensity that feels deeply personal. Before the record takes too dark a turn, Clapton releases the pressure with a silly Bo Diddleyized version of “Willie And The Hand Jive.” “Get Ready” is a heated back-and-forth between Clapton and Elliman, and the first side closes with an immaculately conceived cover of “I Shot The Sheriff” that sweetens the original with some killer backing vocals.

Side two features a pair of blues songs, “I Can’t Hold Out” and “Steady Rollin’ Man,” and one of those quasi-Beatles epics that Eric was known for, “Let It Grow.” When Clapton sings “Love is lovely,” as simple as it is, there’s a profundity in that simplicity that belies a kind of genius. Also included here is the last song that Duane Allman recorded before his death, “Please Be With Me,” which originally appeared on Cowboy’s 1971 album, 5’ll Getcha 10. I haven’t heard a version of this song that is less than gorgeous.

As much as 461 Ocean Boulevard is a triumph for Clapton, the real story here is the band. Unlike those Cream albums where everyone was trying to upstage everyone else, everything here flows from a natural place. The fact that half of the band was already working together (Jamie Oldaker, Dick Sims, Carl Radle) likely had a lot to do with that, and Clapton found the perfect complements to his voice and guitar in Elliman and Terry. The music on 461 Ocean Boulevard just clicks, as though the group had been playing these songs all their life. I’ve made the analogy before between a comfortable pair of blue jeans and music, and this is the Clapton album I’m mostly likely to wear when I just want to relax and hear some great music.

* On the later CD reissues, this track was switched with “Better Make It Through Today” and moved to the end of the disc.