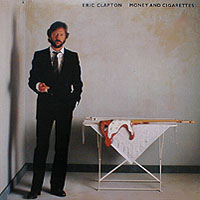 Kronomyth 12.0: ALL IRONED OUT. Clapton emerged clean from a second stint in rehab and, against doctor’s orders, was soon back in the studio making another album with a new band for a new label. Money And Cigarettes (the title alludes to what Clapton felt remained after losing alcohol) is, fittingly, a clean-sounding record featuring originals, a few blues covers and the professionally penned hit, “I’ve Got A Rock N’ Roll Heart.” The backing band is his tightest group yet, with Ry Cooder, Duck Dunn, Roger Hawkins and a returning Albert Lee (now mostly on keyboards). While the original material isn’t all that original (“Ain’t Going Down,” for example, is essentially a rewrite of “All Along The Watchtower”) and the blues covers are likely too slick to please purists, Money And Cigarettes does move at a good, brisk pace and Clapton seems re-energized on the record. There are a few songs on here that would seem to be written for wife Pattie: “The Shape You’re In,” “Pretty Girl” (a fine piece of pop) and “Man In Love.” Speaking of which, Clapton definitely has the upper hand over George Harrison this time; I’d encourage this album’s detractors to listen to Somewhere In England or Gone Troppo before pronouncing judgment. Although the album didn’t go gold, it did mark the beginning of a second commercial wind that helped Clapton sail through the 80s. From this point forward, a Clapton record could be expected to feature crisp, clean pop and blues with at least one big hit on it. In a sense, the 80s smoothed out the rough edges of the 70s Clapton, which made for a better (if more predictable) product.

All songs written by Eric Clapton unless noted.