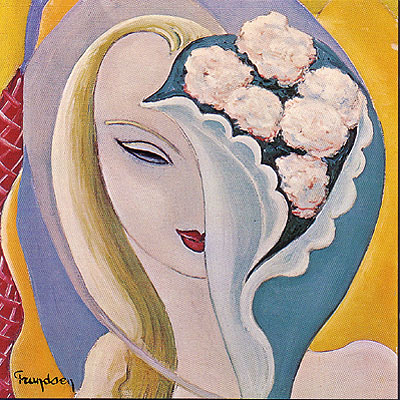 And so it came to pass, so soon after the passing of Jimi Hendrix, that two of the greatest living guitarists, Eric Clapton and George Harrison, would release their greatest works, All Things Must Pass and Layla. In a strange coincidence, both albums featured the same core players—Carl Radle, Bobby Whitlock, Jim Gordon. In an even stranger coincidence, Clapton’s album was (secretly) dedicated to Harrison’s wife, the former (and future) Pattie Boyd. With romance, intrigue and a beknighted Beatle in the mix, Layla had all the making of Arthurian legend; and if neither All Things or Layla turned out to be the holy grail, they are nonetheless among the sacred relics of rock and roll. Layla, written with Bobby Whitlock, is a loose concept album that, at first indirectly via the Derek moniker, deals directly with Clapton’s infatuation with his famous friend’s wife. For the only time in his career, Clapton actually surpasses his work with Cream. “Layla” and “Bell Bottom Blues” are brilliant from beginning to end. “I Looked Away,” “Why Does Love Got To Be So Sad,” “Anyday” and “Tell The Truth” belong with his better ideas over a long career. Sharing vocals with Bobby Whitlock and trading licks with Duane Allman, Clapton still manages to step forward more on this effort than his debut record with Delaney and Bonnie Bramlett (which also featured Radle, Whitlock and Gordon). The similarities to George are sometimes uncanny (e.g., “I Am Yours”), although the tribute to Hendrix (“Little Wing”) simply seems canned next to the original. In between are a few blues covers that feel more like outtakes, some of them (e.g., “Have You Ever Loved A Woman”) selected as coded messages for Clapton’s feelings. Audiences initially didn’t know who Derek and The Dominos were, but they soon connected the dots, and Clapton’s “secret” love song may be the one most readily identified with him when all is said and done. Layla has since been issued in an expanded 20th anniversary edition featuring the original jams between Clapton and Allman, and an even more widely expanded 40th anniversary edition that includes alternate takes, released as The Layla Sessions.

The Pictures
Cover painting by Frandsen de Schonberg, all got together by Bruce McCaskill.