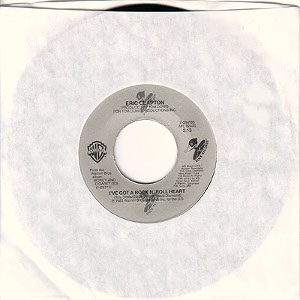 Kronomyth 12.01: DUCK-MOBILE. This was Clapton’s first hit following his second stint in rehab. Written by Troy Seals, Eddie Setser and new songwriter Steve Diamond (Seals and Setser, you may recall, had penned “Black Rose” for Clapton’s last album), “I’ve Got A Rock N’ Roll Heart” has a catchy melody with a good hook and espouses the core American values of vintage Chevrolets and screaming guitars. I wouldn’t know a ’57 Chevy if it ran me over several times, dislike screaming guitars and thus, it appears, I do not have a rock ‘n’ roll heart (although my pancreas is partial to jazz). While this song was eventually tapped by T-Mobile years later (and enjoyed a brief resurgence), the songwriters might just as well have shopped this directly to Madison Avenue and avoided the middle man, since it’s tailor made for a truck commercial or a beer commercial or some product where the target audience would be likely to engage in a discussion of whether the ’57 Chevy really was the best Chevy model after the commercial was over. The B side is “Man In Love” from the same album, written by Clapton with a melody borrowed from somewhere, but otherwise a likeable song that shuffles along purposefully. Both songs are identical to their elpee versions and give a fair indication of what to expect on Money And Cigarettes. The single is non-collectible as such, unless the idea that it’s the first release on Duck Records floats your boat.

The Word
Old cars and screaming guitars are all nice and fine, but don’t make them idols in your life. “Set your mind on the things above, not on the things that are on earth.” (Colossians 3:2)