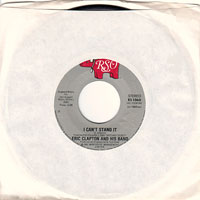 Kronomyth 10.01: ERICONOMICAL. The Eric Clapton of the 80s was another animal altogether. The music and the man were cleaner, the voice was confident, the band was English. The first single from Another Ticket, “I Can’t Stand It,” snaps and bristles with emotion and energy. It’s the anomaly on an underwhelming album, yet a sign of things to come as Clapton combined the past (blues, country) with present-day studio production to help usher in a new age of modern blues. The flip side, “Black Rose,” is country Clapton, Eric singing the main verses with audible aplomb and Gary Brooker (I’m pretty sure) joining on the chorus. Both songs are identical to the elpee versions that appear on Another Ticket.