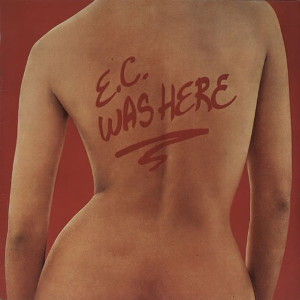 The graffitoed walls that read “Clapton Is God” are surely singing somewhere, blissfully ignorant of their profanity. After the successful comeback of 461 Ocean Boulevard, Clapton and his crew took a trip in the Wayback Machine to dig up the ghost of John Mayall’s Bluesbreakers (“Have You Ever Loved A Woman,” “Rambling On My Mind”) and breathe life into the blanched Blind Faith (“Presence of the Lord,” “Can’t Find My Way Home”). Nearly everyone has commented that this live compilation (culled from shows on both coasts and the UK) is both an unexpected assortment and a welcome return to Clapton’s blues-rock beginnings. After a self-imposed, drug-addled exile, Clapton wouldn’t turn his back on music or the blues again. E.C. Was Here is a tour de force, led by the brilliant guitar playing of Clapton and George Terry. After hearing the hot licks on “Drifting Blues” and “Have You Ever Loved A Woman,” you’ll be tempted to run to the hardware store and buy a can of spray paint yourself. Organist Dick Sims is also terrific on this album. The rhythm section of Carl Radle (the lone holdover from the days of Derek) and Jamie Oldaker is rock solid, and Yvonne Elliman does well in the thankless task of sweetening Eric’s voice to approximate Steve Winwood. (Marcy Levy, we’re told, plays tambourine.) Other than the tasteless album artwork (the back cover is even worse), the only complaint I can lodge against E.C. Was Here is that there isn’t more of it. The band is one of Clapton’s best, and their performances of “Let It Rain,” “Badge,” “Layla” and “I Shot The Sheriff” should have been preserved for the listening enjoyment of later generations (#thinkofthechildren). A quick glance at the track listing is likely to illicit a shoulder shrug, but don’t let your shoulders lead you. Follow your heart; you’ll find plenty of it on this album.