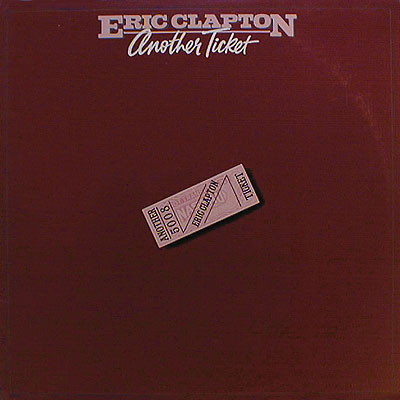 Just another Eric Clapton album on the surface, though things were apparently falling apart underneath. What’s here is actually his second attempt at a first album with his new English band, the original sessions having been produced by Glyn Johns in the Spring and rejected by RSO soon after. A couple of songs were carried over from the first attempt (e.g., “Rita Mae,” “Something Special”) but it was the addition of songs like “I Can’t Stand It,” “Another Ticket” and “Black Rose” that made the difference. Produced by Tom Dowd in the Bahamas, Another Ticket marks a turning point of sorts for Clapton toward a crisper, confident, streamlined sound. Gone was the loose, shuffling sound of Tulsa, replaced by a crackerjack squad of English ringers: Albert Lee, Gary Brooker, Henry Spinetti and Dave Markee. Really, all you need to do is wind these fellers up and watch them run. I wouldn’t tell you that Another Ticket is a better album than Backless (they’re about equal), but it is a more consistent record. His vocals seem more confident, his guitar solos stand out a little sharper and the blues covers (“Floating Bridge,” “Blow Wind Blow”) are stamped with Clapton’s personality. The backing band stays in the background, no small feat given the star presence of Brooker and Lee, the latter sharing the leads only on the aptly titled “Catch Me If You Can.” Among the middle-pack Clapton albums, Another Ticket is as good a destination as any for fans. It’s too bad they didn’t stick together for a second album, but you can hear a couple of leftovers on Gary Brooker’s album, Lead Me To The Water (1982).