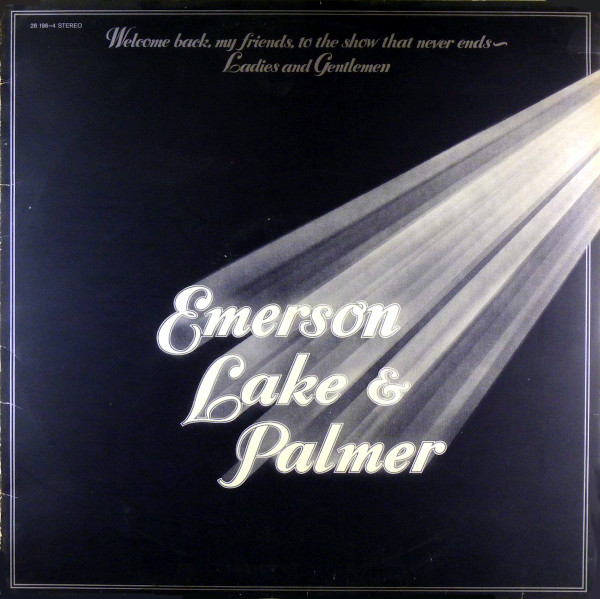 What better way to honor one of the world’s great trios than a triple-elpee live album?

This is the cherry atop the sundae’s best of ELP: a three-record set that, pound for pound, leaves a deeper impression than any of their other works. Prior to the advent of compact discs, the only way to enjoy a two-hour concert like this was to buy a ticket. Very few musical acts warranted the investment or the interest of a three-record set; Yes and Paul McCartney are the two that come to mind. Among such rarefied company, Welcome Back My Friends and Yessongs best succeed at replicating the original, gargantuan studio structures on stage, with the caveat that ELP does it with almost half the players.

The show kicks off with a high-octane rundown of Hoedown before settling into the stately Jerusalem. These are followed by Toccata and a percussion solo that brings the Emerson/Lake/Palmer axis full circle. Side two features an almost-complete performance of Tarkus (an extended “Aquatarkus” spills over to the second record). This, for my money, is the highlight of the concert, although a full performance of Karn Evil 9 at the end could equally lay claim to that title. Thoughout, Emerson, Lake and Palmer delight with their arsenal of sounds and effects. At some point, you expect that Emerson’s fingers will fall off, that Lake will lose his voice or Palmer’s kit explode. Nothing of the sort happens; their last performance is as strong as their first.

Record two is largely split between Greg Lake and Keith Emerson and includes Emerson’s Piano Improvisations, a performance unique to this album. Take a Pebble is stoned perfection and features “solo” performances from both Emerson and Lake. Emerson’s improvisations include nods to both classical/jazz pianist Friedrich Gulda and swing pianist Joe Sullivan. You have to admire anyone with such informed (and such eclectic) taste, even if the history lesson is a bit dry at times. The closing medley of Jeremy Bender and The Sheriff, two of my favorite ELP songs, arguably backfires by showing how much the two songs sound alike.

Record three re-creates the complete “Karn Evil 9” series plus an extended solo from Carl Palmer sandwiched in the first impression. It must have been a thrill to watch them play this on stage; it’s almost as thrilling to listen to it on vinyl. Granted, I’ve given Trilogy and Tarkus more spins over the years because of the investment in time that Welcome Back My Friends represents, but no other ELP album welcomes me with wider arms than this one.