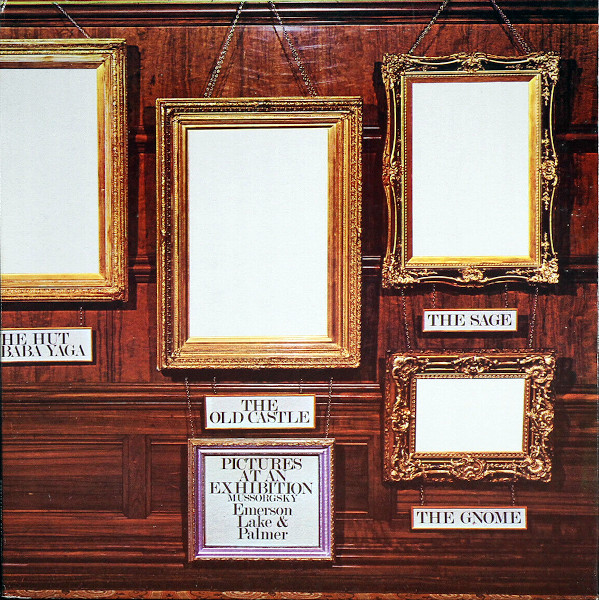 Life is unfair. Of course, you don’t need me to tell you that, unless you’ve been living under a rock, in which case life is dark and clammy and, yes, probably also unfair because there are no doubt people living under much nicer (or worse) rocks than you through nothing but sheer chance and circumstance. I mention this because Modest Mussorgsky died before he could hear his offspring flower into its full potential. I am not referring to the Rimsky-Korsakov or Ravel arrangements, but the perfectly progtastic version presented here by Messrs. Emerson, Lake and Palmer.

In the snobbishness of my youth, which has since been replaced by the sluggishness of middle age, I was apt to hear this live performance as grandiloquent grandstanding. (The one may presume the other, but I just liked the sound of them together.) And the Ravel arrangement is still the best way to hear this music, yet it doesn’t excite the senses in the manner that ELP has conceived it on Pictures at an Exhibition. The rush of joy from the Newcastle crowd following Keith Emerson’s opening announcement that “We’re gonna give you Pictures at an Exhibition” is the audio equivalent of adrenalin. From that point forward, the floodgates of imagination are thrown wide as we take in the sights and sounds of these musical paintings.

The trio had first premiered their interpretation (the piece might just as well be called an inspiration) of Mussorgsky’s masterpiece at their first official performance at the Isle of Wight Festival. The version captured here is from a March 26, 1971 performance at the grand Newcastle City Hall. In a sense, the Hall and its inhabitants are the invisible fourth member, adding deep acoustics and emotions to the music that fairly approximate what it must have felt like to be in the room.

The entire work follows the outline of Mussorgsky’s original, alternating promenades between various paintings. The promenades are given slightly different treatments: the second features vocals, the third is bombastic. ELP slips a few of their own creations into the gallery—The Sage, Blues Variation, The Curse of Baba Yaga—and mixes them with adaptations of Mussorgsky’s pieces (The Hut of Baba Yaga, The Gnome, The Old Castle). The song cycle culminates with the majestic close of The Great Gates of Kiev, a dreamed-of gateway now a gateway to dreams. Oddly, the group seems stumped for a suitable encore, parading out the novelty Nutrocker, which seems terribly trite after such a walk with giants.

For my money, this is one of ELP’s best albums, one of the greatest live prog albums ever recorded, and reason enough to classify Newcastle City Hall as an historically important building. Though chronologically this is the band’s third album, it is rather the firstfruits of an amazing alignment of talent that represented perhaps the pinnacle of progressive rock when it was first performed in 1970. The bar had been raised, the gates opened, and the wave of prog warriors were coming to lift the fallen standard of musical art once more. So, naturally, critic Robert Christgau gave it a D+, begging the question of what the plus was for, since I’m sure we can all agree on what the D means.