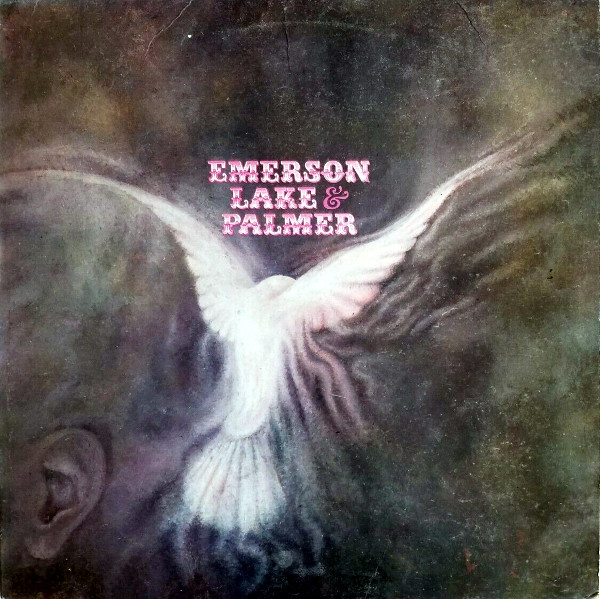 Kronomyth 1.0: King crimson and the nice to meet you.

They were not the first rock supergroup, a distinction I would accord to Blind Faith. And their first album was not the first progressive rock album by any means. But Emerson, Lake & Palmer was the first progressive rock album recorded by a supergroup, which makes it an important work in the annals of rock and roll. It also happens to be an awesomely cool album that merges the better parts of The Nice and King Crimson into arguably the truest vision yet of a classical/rock hybrid.

Keith Emerson is the band’s grand sonic architect. He creates complex classical arrangements and adaptations of classical composers (Béla Bartók, Leoš Janáĉek, J.S. Bach) on organ, piano and synthesizer. For the opening of Take a Pebble, he even strums the strings of a grand piano like a harp. He’s not quite a one-man band, but he does carry the lion’s share of the music on his shoulders. Emerson was the main attraction in The Nice too, but with ELP he was given even more space to shine.

Greg Lake was previously the bass player and singer in King Crimson, a group whose first album, In the Court of the Crimson King, is universally recognized as one of the earliest and best examples of progressive rock. Lake played a smaller role in Crimson, which was Robert Fripp’s band from the beginning. In ELP, more emphasis was placed on his wonderful voice and soulful balladry. As a bass player, he’s no Jack Bruce, as a guitarist, no Robert Fripp, but as a singer you couldn’t do much better.

Carl Palmer was arguably the least known of the three, having appeared briefly with Arthur Brown and Atomic Rooster. He and Emerson are the band’s two strongest musical contributors. Just as Emerson’s playing had a decidedly English feel to it that leaned heavily on pomp and circumstance, Palmer’s drumming often felt like a marching boy gone mad, his disciplined rhythms played with mathematical precision on snare, cymbals and assorted drums.

The opening instrumental, The Barbarian, explodes out of the speakers and immediately recalls the furnace-blast halls of the crimson king. Lake’s dulcet voice provides a soothing balm on the next track, “Take a Pebble,” which is embellished by Emerson’s arrangement of Bartók’s Allegro Barbaro (according to Wikipedia, since I’ve never heard the piece). The classic Knife-Edge closes out the first side of music, this time with music from Bach and Janáĉek woven into the arrangement. Again, its heavy style recalls King Crimson but with different dynamics.

Emerson’s The Three Fates is the keyboardist’s classical showcase, with three separates pieces arranged for organ, piano and rock trio. It’s one of the best things Emerson has ever done, and Palmer rises to the occasion as well. The pair continue their adventures on the instrumental Tank, which features a terrific drum solo from Palmer. Lake returns to the spotlight for Lucky Man, simply one of the finest songs in the progressive rock canon. Yet it’s only fitting that Emerson and Palmer steal the fading spotlight with a coda for the ages.

Much has been written about ELP’s first album, and this review is nothing more than the mere jotting of notes. It doesn’t, for example, impart the joy of hearing Emerson’s ivory towers of sound held at the sky’s throat like a knife, the yearned-for Galahad purity of Lake’s voice or the clockwork genius of Carl Palmer. There is, of course, a grandiloquence in the music of Emerson, Lake & Palmer that some may find off-putting, but for progressive rock fans this is about as good as it gets.

*Subsequent pressings correctly credited the music of Béla Bartók on “The Barbarian” and Leoš Janáĉek and J.S. Bach on “Knife-Edge.”