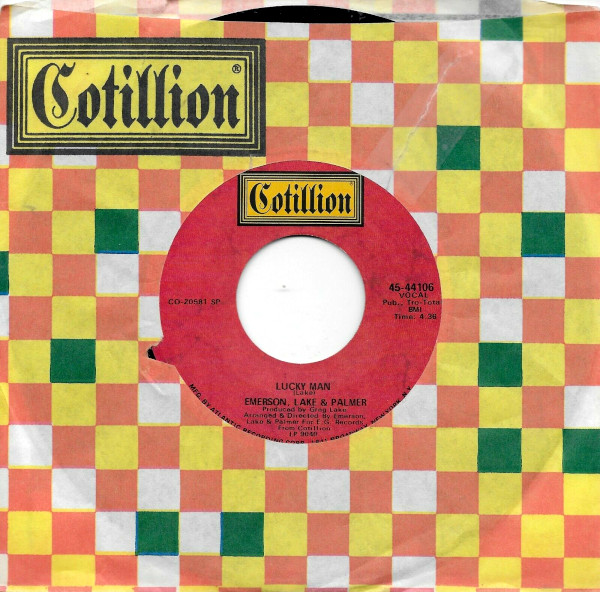 I’m listening to J.S. Bach’s French Suite No. 1 right now, and it reminds me that classical music is one of the sublime pleasures of life. For years, I listened primarily to classical music, although any attempt on my part to critique it has failed miserably. I don’t have the musical education to dissect it nor the soul to crush it. I might just as well tell you why the daffodil is an uglier flower than the rose.

When the time came for a solo in Knife’s Edge (originally referred to as “Knife-Edge” on their first elpee), Keith Emerson turned to Bach’s French Suite, a fact he openly admitted from the beginning. As for the main music, it’s actually a clever arrangement for rock group of the opening theme of Leoš Janáček’s Sinfonietta. Both Bach and Janáček were eventually credited on the song. The band’s roadie, Richard (Dik) Fraser copped a credit for himself as well after helping out with the lyrics. Plenty of kudos to go around for that song.

“Knife’s Edge” is one of the highlights on Emerson, Lake & Palmer; not the sort of thing you expect to encounter on a B side, but ELP broke so many rules. The song does include a lot of original music, including the first half of Emerson’s solo that leads up to the Bach quotation. It’s also one of the heaviest things they’ve done, evoking King Crimson’s “20th Century Schizoid Man.”

The A side, Lucky Man, is another matter altogether. Emerson doesn’t even show up until the end with an ad hoc Moog “solo” that was never intended to be on record. With lyrics based loosely on “Richard Cory,” or so I’ve always imagined, it’s a gorgeous, timeless ballad from a man, Greg Lake, who knew his way around a good ballad. The drumming on this song is terrific, made all more impressive by the fact that the song doesn’t really call for drums. Most drummers would have just hit a few cymbals, but Carl Palmer isn’t most drummers.

An edited version of “Lucky Man” was released for promotional singles, although I haven’t heard it myself. Presumably they cut out the ending, since there’s not a whole lot of fat to cut from “Lucky Man.” There also appear to be some regional variations regarding the use of mono versus stereo mixes, in case you care about these sorts of things, which I haven’t bothered to detail because the world is ending. I hope to reconcile the two German releases, since they appear to have been released within a year of each other, the outcome of which will determine whether I treat the #10.203 releases as an original release or a re-issue. Or I may go daffodil-stomping instead and not get around to it at all.