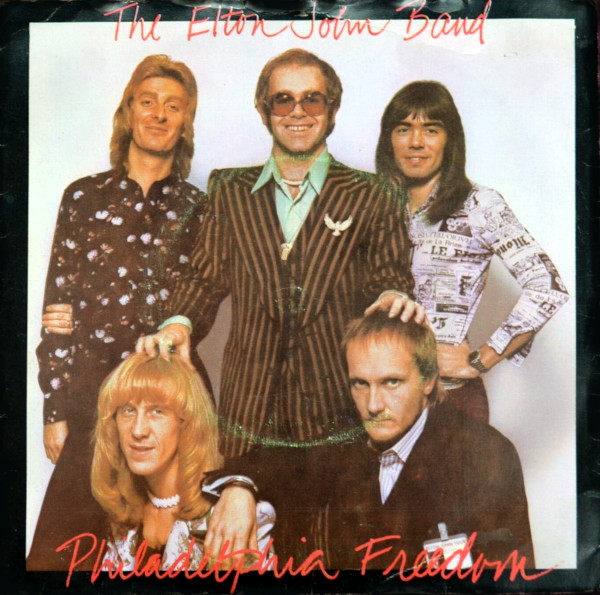 A bicentennial celebration? No. A bisexual anthem? Not quite. Anyone for tennis?

Certainly the greatest tennis team anthem ever written. Elton wrote the song as une hommage to the Phildelphia Freedoms, a World Tennis Team led by his friend, Billie Jean King. The Freedoms folded the following month, although you can’t blame Elton for that. I was a kid when this came out, was hardly into Philly Soul (it took me years to warm up to David Bowie’s Philly phase) and assumed, like most people, that it had something to do with the American bicentennial and disco. It was, and remains, a remarkably well-done song, worthy of its charting-topping status. Arranger Gene Page does a great job on the orchestral arrangement; it’s a shame he and Elton didn’t work together again.

I have to tell you, I’m not really sure what the song is about. Bernie Taupin didn’t care about tennis (you can’t fault him for that), and took the song’s title at face value, writing a song about independence from something. The flip side is excised from the performance of Elton and John Lennon at the Madison Square Garden, occasioned when Lennon lost a bet that “Whatever Gets You Thru The Night” wouldn’t reach #1 (it did). The pair selected a few songs including “I Saw Her Standing There” (which John introduces as a song from his estranged fiancé). John appears a bit nervous, but the song goes off without a hitch.

Despite its unusual origins, “Philadelphia Freedom” is an important milestone in the music of Elton John, as it marks one of his earliest attempts to explore the Philly soul sound that would morph into disco. It is also unusual for its credit to The Elton John Band, a nod to the fact that Elton and his band had become a rock-solid unit over the last few years. Although it missed the cut for his first greatest hits album, “Philadelphia Freedom” was a highlight on the second greatest hits volume released in 1977.