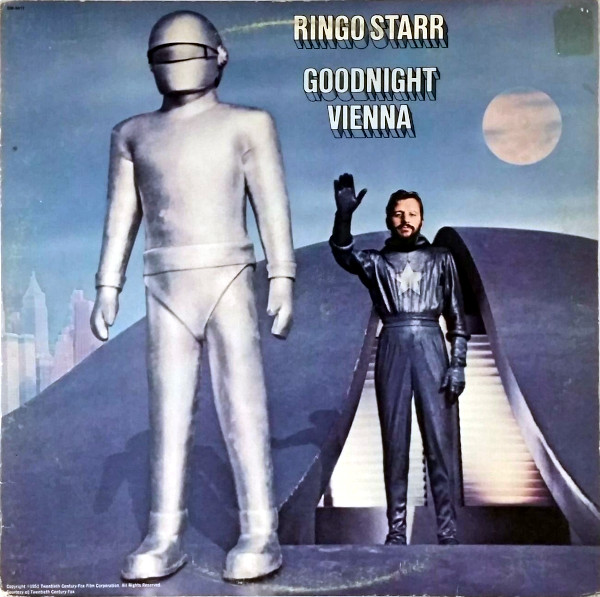 John Lennon’s lost weekend is again Ringo’s gain as he moves the party to his place and scores another gold record.

It was da-da-down to Ringo and John at this point, but the old Snookeroo still managed to deliver more actual, honest-to-goodness hits on Goodnight Vienna. “No No Song,” “(It’s All Da-Da-Down To) Goodnight Vienna” and “Only You” did well on the charts, and only the last could be credited to post-Beatlemania inflation–the rest of these are actually really catchy. Funkier and more electric than his last record (and thus, I guess, more boogalooey), Goodnight Vienna starts on familiar footing with a new song from John Lennon (although you may wonder why he says goodbye when he should be saying hello). Ringo Starr carries the rest of the record with the usual stalwarts (Harry Nilsson, Jim Keltner, Klaus Voormann, Billy Preston, Vini Poncia) and a peck of pianists (Elton John, Dr. John, David Foster, Lincoln Mayorga).

The Starr of the show again manages to pull a few good ideas from his melon and chooses some interesting covers, including Roger Miller’s “Husbands and Wives” and Allen Toussaint’s “Occapella.” His voice hasn’t improved, and yet it’s oddly compelling on songs like “Easy For Me,” almost as if Ringo had grown comfortable enough with his voice to render songs in his own idiom (think Frank Sinatra with a head cold). The horn sections and backing vocalists further sweeten the nasally roughness of Ringo’s voice, which seemed a little dry on his last album, all of which lends to the impression that Goodnight Vienna is a more musical-sounding album than its predecessor. It is more lively by a little, but that doesn’t compensate for the lack of The Beatles’ participation. Thus, without George Harrison contributing harmony vocals or Paul McCartney’s romantic ballads in the mix, there might be a little too much Ringo in this strawberry tart for some tastes. Still, compared to what could be expected from the man, Goodnight Vienna is a triumph.