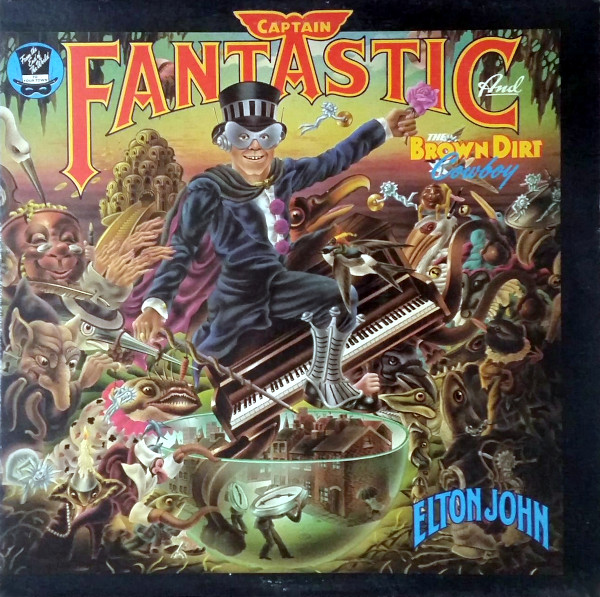 Elton’s and Bernie’s semi-autobiographical masterpiece may include one only hit, but rarely misses.

Kronomyth 11: The things we wrote today will sound as good tomorrow.

The lavishly packaged Captain Fantastic and The Brown Dirt Cowboy is a feast for the senses. There is, foremost, the music: a continuation of the brilliant songwriting that appeared in rich measure on Goodbye Yellow Brick Road. But the album is also an unabashed celebration of Elton John and Bernie Taupin, complete with illustrated lyrics booklet, a scrapbook (featuring Elton and Bernie in their own comic) and the fantastic drawings of Harry Willock and Alan Aldridge (cf. The Who’s A Quick One) throughout.

For me, Goodbye, Capt. Fantastic and Rock of the Westies represent the peak of Elton and Bernie as a songwriting team. I’m probably by my lonesome on that last one (most people prefer Madman Across The Water or Honky Chateau), but nearly everyone agrees that Captain Fantastic is, well, fantastic. While it’s one of Elton’s best albums, you won’t find his best-known songs on here. “Someone Saved My Life Tonight” is the familiar hit, almost seven minutes of pure pop bliss on a par with 10cc’s “I’m Not In Love,” but the album was his first since Tumbleweed Connection not to contain at least two bonafide hits. You could point to the nonalbum “Philadelphia Freedom” as the reason, or say that “(Gotta Get A) Meal Ticket” was a missed opportunity. The real reason, though, is that Elton and Bernie were focused on making a great album this time rather than writing a few great songs.

In many ways, Captain Fantastic feels like an autobiographical concept album. Maybe it’s the title track, a wonderful example of self-mythologizing, or the self-referential “Bitter Fingers” and “Writing.” And, of course, history has since shed light on the meaning of “Someone Saved My Life Tonight” and its references to Elton’s wisely averted marriage to Linda Woodrow. The scrapbook with pictures of Elton and Bernie through the years only supports the notion that the Captain and the Cowboy were stopping at the top of mountain in order to admire the road behind them and the road ahead.

It would be wrong, however, to forget the Captain’s co-stars, particularly guitarist Davey Johnstone. Captain Fantastic is Johnstone’s finest hour. For the first time on an Elton John album, the keyboards take a back seat to the guitar. Johnstone seizes the opportunity to bring in all manner of stringed instruments (electric, acoustic, mandolin), multitracking his parts in many cases. New addition Ray Cooper gives the arrangements an added dimension with his array of percussion instruments, while Dee Murray and Nigel Olsson continue to provide strong support; Olsson in particular shines on “Better Off Dead,” with producer Gus Dudgeon conjuring some instant karma of his own, and the epic album-closer, “Curtains.” Unfortunately, it would be curtains for Murray and Olsson after this album, as Elton reshuffled the band.

If you enjoyed the album cuts on Goodbye Yellow Brick Road (e.g., “Harmony,” “Love Lies Bleeding,” “Jamaica Jerk-Off”), more joy awaits on Captain Fantastic. “Bitter Fingers,” “Better Off Dead,” and “Writing” are some of my favorite Elton songs from any album. As someone who cringes every time a piano ballad rolls around, I was also pleased to hear Elton move in a more electric direction on this album, using synthesizers, mellotron and electric piano on many of the songs. I would give Goodbye the nod as Elton’s magnum opus, but Captain Fantastic may well be the strongest single piece of vinyl to bear his name.

CD reissue bonus tracks
11. Lucy In The Sky With Diamonds
12. One Day At A Time
13. Philadelphia Freedom

2CD Deluxe Edition reissue
A14. House of Cards
Live from “Midsummer Music” at Wembley Stadium, London, England, June 21, 1975
B1. Captain Fantastic and the Brown Dirt Cowboy
B2. Towe of Babel
B3. Bitter Fingers
B4. Tell Me When The Whistle Blows
B5. Someone Saved My Life Tonight
B6. (Gotta Get A) Meal Ticket
B7. Better Off Dead
B8. Writing
B9. We All Fall In Love Sometimes
B10. Curtains
B11. Pinball Wizard
B12. Saturday Night’s Alright For Fighting