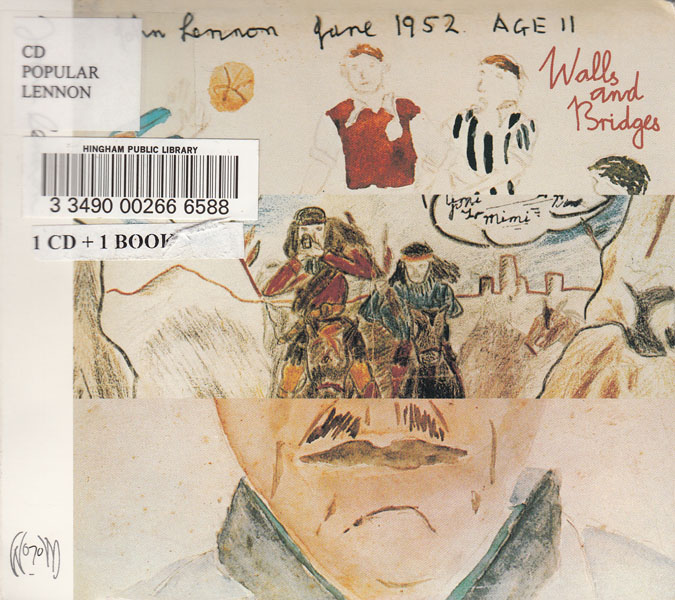 An album fueled by Lennon’s excesses, yet also one of his most commercially successful records, featuring two hit singles.

Kronomyth 7.0: Portraits of the artist as a young man.

I was 11 years old when I bought this album, the same age as Lennon when he drew the pictures that adorn Walls and Bridges. My Beatles fantasies in full blossom, every album from John, Paul, George and Ringo was a treasure box to be opened. Walls and Bridges, with its unique tri-strip album cover—this is still one of the best packaged albums I own, from the full-size picture booklet to the build-a-Lennon cover—promised much and didn’t disappoint: “Going Down On Love,” “Whatever Gets You Thru The Night,” “What You Got,” “#9 Dream,” “Surprise Surprise (Sweet Bird of Paradox).”

As a boy, I didn’t have any inkling into the Lennons’ personal affairs and still have no interest today. When the books came out after John’s death, I couldn’t have cared less for them; the man was gone, the story was written. As I grew older, I let my appreciation for Walls become dimmed by dull critics who lumped this under Lennon’s Lost Weekend and docked it a star or two with a disapproving tongue cluck as an unremarkable album from a remarkable artist. Then came this lovely 2010 remaster, and my faith in Walls And Bridges was restored.

While it’s one of his least philosophical albums, it’s also his most musical, with terrific accompaniment from old friends (Elton John, Harry Nilsson, Klaus Voormann, Jim Keltner, Arthur Jenkins, Nicky Hopkins, Ken Ascher) and new faces (Little Big Horns, Jesse Ed Davis, Eddie Mottau). It’s still a personal record, with love songs to Yoko (“Bless You”), confessionals (“Scared,” “What You Got,” “Going Down On Love”) and a caustic swipe at estranged manager Allen Klein (“Steel And Glass”). And yet it manages to be one of Lennon’s most fun records to listen to, aided in large part by upbeat arrangements. Although the tactile experience of the original elpee is one of my fondest memories in album collecting, I’d have to give the 2010 paper sleeve remaster the nod just for its vastly superior sound quality.

All songs written and arranged by John Lennon unless noted.

CD reissue bonus tracks
13. Whatever Gets You Thru The Night (live)
14. Nobody Loves You (When You’re Down And Out) (alternate version)
15. John Interview