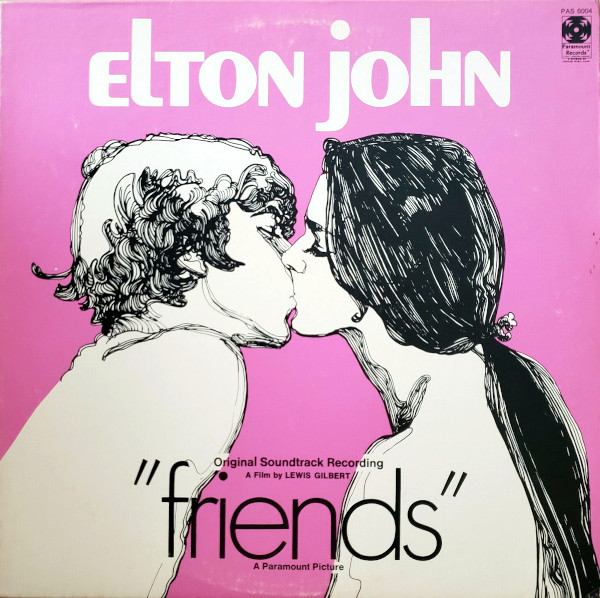 Elton and arranger Paul Buckmaster provide the score to this mismatched love story.

This one’s pretty pink even before you get to the packaging: a light classical film score, ballads, a song about the importance of friendship. Elton John and Paul Buckmaster lent their talents to this story of young love, but neither the film nor the soundtrack have escaped the dust of time. I bought this for one song, “Can I Put You On,” and was happy to get the honky-tonkin’ “Honey Roll” as a throw-in. The remaining ballads from Elton and Bernie are precious and precocious: “Michelle’s Song,” “Seasons,” “Friends.” The title track was a minor hit over here, as was the album, but this is typical of most soundtracks: one or two good songs, some half-baked leftovers and classical pop that strives to make silk suites out of a polyester melody or two. On the classical side, Buckmaster’s ten-minute “Four Moods” is at least ambitious, but there are plenty of other B’s in the alphabet (Bach, Beethoven, Brahms, Bruckner) who do this sort of thing better.

“All the Friends stuff had to be done in four weeks; it was such a panic session. They wanted to release a soundtrack album, and I didn’t want them to release a soundtrack album with three songs on it and fill it out with garbage, motorists peeing by lakes and things like that, so we said, well, we got two spare songs, have those, “Honeyroll” and “Can I Put You On,” which we’d been doing onstage anyway. So they put them on during transistor radio sequences. We put them on the album as a bonus, really. I really regret that because, fuck, I would have wanted to put them on our own album.” — Elton John, as quoted in a 1973 Rolling Stone interview.

As someone who owns more than a few Elton John albums, I can tell you that Friends can wait. The proper classic albums (even Caribou) have more in store, and from there you’d be better off spending your money on live albums, the tacky ‘80s stuff, even the early Empty Sky before making the acquaintance of Friends. What’s on here from Elton is all right, there just isn’t enough of it. Of minor interest, it does feature one song (Honey Roll) with an actual saxophone solo, which is a rarity among Elton John songs. For a good reason, apparently.

All songs composed by Elton John and Bernie Taupin unless noted.