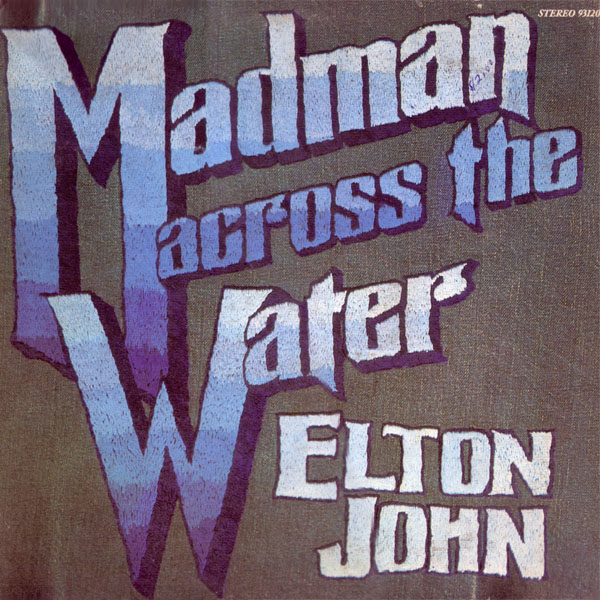 This is one of Elton’s heaviest and darkest albums, despite the light presence of “Tiny Dancer” and the perennial favorite, “Levon.”

Yes, I know that you don’t think Elton John is anywhere near prog. Mock on. You can even sing a bar of “Candle in the Wind” badly if it makes you feel better. But the early albums were portentous clouds of proggishness: the strings, the symbolism, the weighty excess. Madman Across the Water is the heaviest of these, like Tumbleweed Connection before it a collection of dark tales partially populated by American pulp fiction (“Indian Sunset,” “Rotten Peaches”). The title track actually dates from the time of Tumbleweed, and pulls everything before it with it like a slow landslide.

Madman begins with a pair of perennial favorites: “Tiny Dancer” and “Levon.” They’re inflated wonders, invoking Jesus and the war and whatever else they could think of to make it sound like the fate of the world hung on love songs and lost souls. The rest of the album never rises to those heights again. There are fine album cuts like the title track, “Razor Face” (shades of Steely Dan’s dark matter), “Rotten Peaches” and “Holiday Inn.” There are also missteps, like the melodramatic “Indian Sunset,” which is almost as awful as “First Episode at Heinton” (desire to punch poet in the nose waxing, waxing, waning).

These recordings date from August with the exception of two (“Levon,” Goodbye”) from February, which might have you thinking that Nigel Olsson and Dee Murray were already on board full time, but the pair in fact only provide the rhythm section on “All The Nasties.” Otherwise, Madman features a hodgepodge of hired guns and old associates: Rick Wakeman, Chris Spedding, Caleb Quaye, Davey Johnstone, B.J. Cole, Herbie Flowers, et cetera. Toss arranger Paul Buckmaster into the mix and that’s a lot of hands, all stirring a serious pot of flavorful post-Beatles/Bob Dylan popular music. Sure, some of this is hokum, but you’d be crazy not to see a boatload of talent at work in Madman’s grooves too.

All songs written by Elton John and Bernie Taupin.