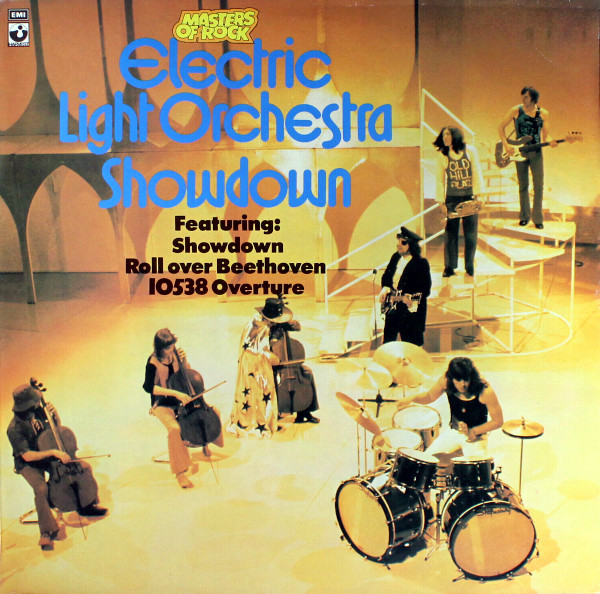 A European compilation that brought listeners up to speed with “Showdown.”

A prescient hybrid of Beethoven and The Bee Gees, “Showdown” was an international hit. Unfortunately, it didn’t appear on the European versions of ELO‘s next album, On the Third Day. Harvest decided a catch-up compilation called Showdown that included its namesake plus highlights from their first two records might have some appeal for listeners who had just discovered Eldorado. This was apparently a marketing ploy that Harvest thought enough of to serialize as Masters of Rock, because Masters of Repackaging would have been a bit too obvious.

I don’t really have an opinion on this album. The poor mixing that plagued the first two albums (especially ELO II) isn’t resolved here. What you get are songs that sound like The Beatles circa Magical Mystery Tour with more strings. As far as the selection goes, Harvest makes informed choices, although I might have swapped out “Mr. Radio” for “First Movement” and found space for a few songs from their third album. Actually, I wouldn’t have released a compilation at all just to accommodate “Showdown.”

Of microscopic interest, the track times on the German version (which is simply titled Masters of Rock Vol 12) reflect the single edits for “10538 Overture” and “Roll Over Beethoven.” Not having heard the German version, I can’t confirm if Harvest simply pulled the wrong track times or if they actually replaced the elpee versions (referred to as the “long versions”) with the single versions for the German release. In fact, I might leave this mortal coil without ever knowing for sure, parting with the words “roll over Beethoven” on my lips like some tragic Citizen Kane. Oh, and in the Netherlands the vinyl was purple.