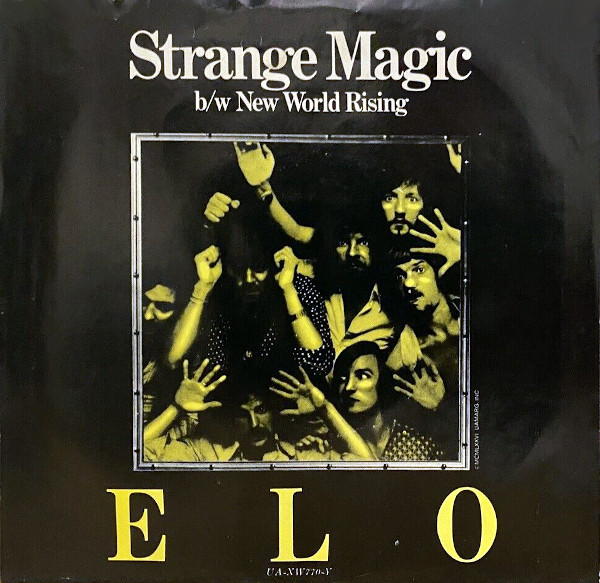 The second single from Face the Music sets into motion a magical string of singles.

Well, this is strange: the album version of Strange Magic runs at 4:29, the version on Ole ELO runs at 4:05, which I assumed was the single edit, but Lo and Behold the single weighs in at a slim 3:22. Using my magical stopwatch (which came with a warning not to pull down the shorts of high school gym coaches during public assemblies), I confirmed the times on all three. The album version at 4:29 includes the string intro missing from the Ole ELO version, and thus your absent 24 seconds are explained. On the single edit, they cut out about half a minute of la-la-la’ing around at the end.

Several B sides exist depending on the country of origin; I got New World Rising (which includes the uncredited “Ocean Breakup Reprise”) and I’m not complaining. As I’ve mentioned elsewhere, ELO had a habit of drawing their B sides from earlier works. The UK B side, for example, would appear to be the live version of Showdown from The Night the Light Went On in Long Beach (based on the 1974 publishing date). Both “New World Rising” and Daybreaker are from On the Third Day, of course. Only Germany got a contemporary B side with Down Home Town.

One final note and then I’ll be on my way: This is the first ELO single that draws a clear comparison to the work of The Beatles. Obviously, the influence was there from the beginning (“Queen of the Hours,” “Bluebird Is Dead”), but their singles were either classical novelties (“Roll Over Beethoven”) or disco songs (“Showdown,” “Evil Woman”). With “Strange Magic,” the band hit upon a magical formula that served them well through the decade.