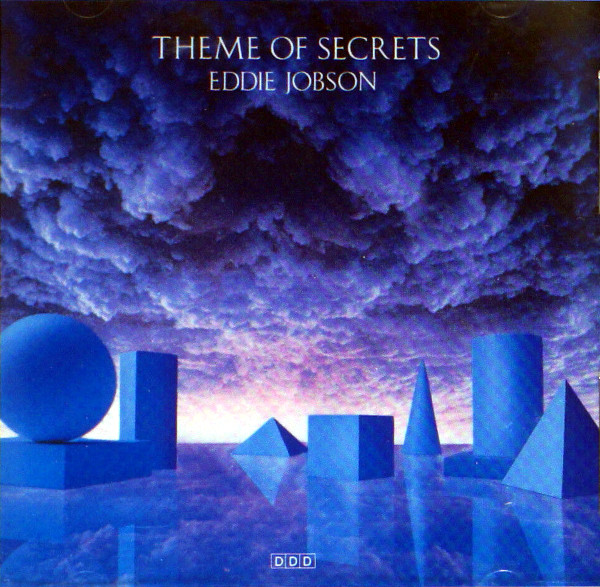 Eddie Jobson gets a new toy for Christmas (the Synclavier) and we get a new album of new age instrumentals.

New age. Just getting that out of the way early in case you want to run screaming in the other direction. The idea of Eddie Jobson making an album of new age instrumentals may not get your blood pumping in excitement. Of anyone making a new age album, really. But this album was produced entirely on the new Synclavier keyboard/computer system. Still nothing, eh? I don’t blame you.

With that out of the way, let me start my review of Theme of Secrets in earnest: Welcome to the end of Eddie Jobson’s career. Yikes, that’s not much better. And yet this album more or less marked his exit from the rock & roll limelight. For the next two decades or so, Jobson would focus his energies on writing music for film, television and advertising. Theme of Secrets is thus a kind of transitional record, as Jobson shifted from vocal to instrumental music.

As I mentioned, the album was created on New England Digital Systems’ Synclavier keyboard/computer. Jobson apparently received an early model of the new Synclavier, studied the manual for several weeks and, by the time it arrived, was ready to begin writing a new album with it. He isn’t the first progressive rock keyboard player to be overly enamored of modern technology or overestimate the emotive power of instrumental music played on a machine. Pete Bardens, Vangelis and Rick Wakeman have all been down this road. Jobson at least appears to have done his homework, utilizing a wide range of effects that run the gamut from a credible grand piano to what sounds like a marble being dropped on a hard surface.

I won’t be doing a song-by-song analysis of Theme of Secrets because this is new age music. (Technically, “new age” implies new age spiritualism, and there’s none of that here, but the label has stuck regardless.) Theme of Secrets is the best place to drop the needle, in my opinion, because it engages the listener with a strong melody. All of the songs, however, are effective at creating a mood and environment using digital sounds. At its worst, the album feels like a demo record for the new Synclavier. At its best, you’ll pay more attention to Jobson’s wizardry than the machinery behind it.

I have, lamentably, listened to quite a few albums of new age music in my time. I blame Tangerine Dream for this, in part, and it’s no coincidence that TD’s Peter Baumann is behind this one. Baumann’s Private Music was beginning to build a stable of prog/rock artists who were making frothy instrumental music, including Andy Summers, Patrick O’Hearn and Jerry Goodman (as well as the much-maligned Yanni and John Tesh). Baumann is also credited as producer here, although I suspect that’s more in the sense of an executive producer, since I don’t know how you would produce an album that was created on a computer.

If you’re a connoisseur of new age music—and I’m pretty sure “connoisseur” is the wrong word—you may well want to add this to your multidisc CD player to spice up your daily bubblebath. If you’re a fan of Roxy Music or U.K., it’s probably better that Jobson’s new age slumming remain a secret. It’s well done as new age albums go, don’t get me wrong, but nobody goes for new age anymore, do they?

All compositions by Eddie Jobson.