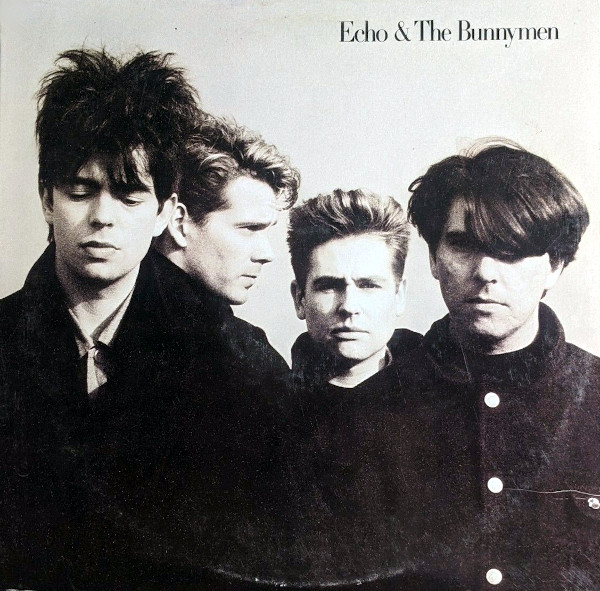 The group smooths over some of the rough edges to the delight of Cure/Smiths fans I suppose.

After the grand gesture of Ocean Rain, it was unclear weather the band had anything left to say. Outside of a new single for the best-of Songs to Learn & Sing, “Bring On The Dancing Horses,” the band remained quiet for three years. But the Bunnies came out of their hole with this eponymous album, the last to feature the original quartet. Instead of changing “Horses” in midstream, producer Laurie Latham was retained, again giving the band a clean, crisp sound that was punchy where previous efforts were murky and moody.

Echo & The Bunnymen (the album) charted as well as anything they’d done to date, refuting the conventional wisdom that says absence from the studio costs a band their audience. “The Game,” “Lips Like Sugar,” “New Direction,” and “Bedbugs And Ballyhoo” proved as good as anything the waning generation of new wave artists was able to conjure. In fact, Echo & The Bunnymen had outlived most of their peers, largely by sticking to their original musical principles. Their 1987 album returns to their core sound — a kind of prickly Doors with a romantic, psychedelic undercurrent — and away from the lush excess of Ocean Rain. Even after dozens of listens later, a lot of Echo & The Bunnymen sounds the same, even while it sounds good. Only “All My Life” is a surprise, a warm entry that was produced by Gil Norton and the band (it’s also my favorite track on the album).

I’m not sure that Echo & The Bunnymen adds one iota to the band’s legend, other than to show that the band could return after a prolonged absence and reproduce the old magic without a hitch. Some critics have raised the album’s banner and proclaimed it one of the band’s best, but for me it’s merely a good album, not a great one like Ocean Rain. Considering the band’s next release, Reverberation, Echo & The Bunnymen shows the class and craftsmanship that Ian McCulloch had provided all along. If you agree, you might want to forego the Ian-less Reverberation and go straight to Candleland.

Tracks 1-11: All lyrics by Ian McCulloch. All music by Will Sergeant/Ian McCulloch/Les Pattinson unless noted.

Pete de Freitas (drums), Ian McCulloch (vocals & guitar), Les Pattinson (bass) and Will Sergeant (guitar) plus a trio of keyboard players: longtime associate Jake Brockman, longtime inspiration Ray Manzarek and The Christians’ Henry Priestman. Gil Norton was originally hired to engineer and produce the album but was soon scrapped; he appears only on the last track, “All My Life” (co-produced by the band). The rest of the record was produced by Laurie Latham (“Bring on the Dancing Horses”), engineered by Stuart Barry and Paul Gomersall, and mixed by Bruce Lampcov.

Anton Corbijn shot the cover photograph for this one too.