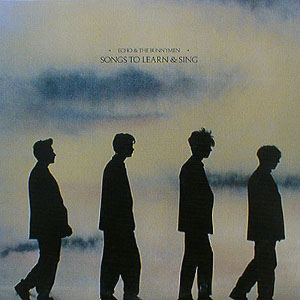 I’ve seen this as something of a wet blanket in the past, if only because it does exactly what you’d expect it to: serve up the singles in chronological order. There is the inclusion of a pair of nonalbum singles, “The Puppet” and the recent “Bring On The Dancing Horses,” to entice fans I suppose, but The Cutter includes more hard-to-find songs. Any eleven Echo tracks will give you a good picture of the band, these eleven more than most, so Songs To Learn And Sing is a good place to start if you just want the hits. But Echo & The Bunnymen made albums, large slabs of glittering sadness that sucked you into their dark world over time like a vortex. Songs doesn’t draw me into its world, since it has no world to call its own. What separates “A Promise” and “Silver” is substantial, and listeners may find the first half too militant, the second half too breathy. Of course, I actually have a saturation point for Echo, with the caveat that albums like Heaven Up Here and Porcupine can be work for me to get through. I have to work a little to make it through Songs, which probably says more about my musical alignment than any deficiency in this music. “A Promise,” “The Cutter,” “Never Stop” and “Rescue” are classic tracks, and everything from Ocean Rain is wonderful, so many listeners may take these Songs to heart. The new track, “Bring On The Dancing Horses,” melts in your mind like cotton candy the way Echo’s music did in the end. However, Songs is unnecessarily humorless; there are lighter moments in Echo’s trophy chamber and none of them appear here. Honestly, you’ll find a better balance of the band’s artistry on albums like Ocean Rain and Crocodiles. The cassette appears to feature 12 tracks (one more than the elpee), the CD features 15 tracks, and a bonus 7-inch also appears to exist. So much work, so little time…

The Players
It’s a compilation, genius.

The Plastic
The album was originally released on November 1, 1985 on elpee and picture elpee in the UK and France (Korova, KODE13/KODE13P), on elpee, CD and cassette in the US (Sire, 25360) with a lyric sleeve, and on elpee and cassette in Germany (Korova, 240 767). The album reached #6 on the UK charts and #158 on the US charts. The cover photograph is from Anton Corbijn.