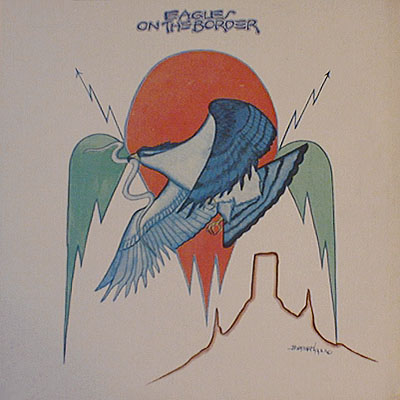 Kronomyth 3.0: You already had me at Already Gone.

This is somewhere on the border between country rock and sophisticated studio rock. The range is remarkable sometimes, and it’s no accident. Eagles were patterned after The Byrds, who had an arsenal of ideas (and styles) at their disposal. Once again, it’s Don Henley and Glenn Frey who make the biggest marks. Henley’s “The Best of My Love” gave Eagles their first #1 hit, while Frey tapped Jack Tempchin again for what has to be one of the greatest kiss-off songs of all time, “Already Gone.” Elsewhere, “James Dean” deflates the legend with a cranky cuteness (sorry, that’s best I could do), Randy Meisner contributes the likeable “Is It True” (with shades of George Harrison’s country delivery) and Don Henley puts on his city clothes for the sophisticated title track (which would have been my choice for the third single).

Personalities begin to crystallize on this record that cover the full spectrum from country to rock: Meisner and Leadon at the one end, Henley at the other, with Frey in the middle and new guy Don Felder in the background (as much as possible for a lead guitarist, anyway). Personally, I’m less interested in the country stylings of “Midnight Flyer.” But when the band plays country with a clean studio attack (“My Man”), it’s no less effective than Steely Dan’s steel guitar opi (“Pearl of the Quarter,” “Fire In The Hole”). On The Border also marked the beginning of the band’s relationship with producer Bill Szymczyk, who re-recorded most of the tracks that Glyn Johns had already done. The result was a punchier, cleaner sound that would serve them well throughout the ‘70s.