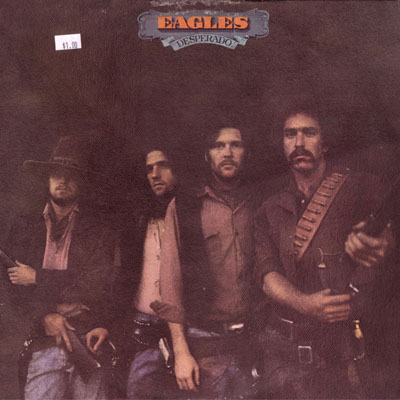 [Kronomyth 2.0]
A Tequila Sunrise and a Few Shots of Coffeyville.

An ambitious country-rock quasi-concept album based on the real adventures of the Doolin-Dalton Gang. Some fans cite this as their favorite Eagles album, presumably the same people who were happy to see them ride with the Outlaws. Over the years, the hits “Tequila Sunrise” and “Desperado” have remained pristine while the rest of the tracks have grown dusty. In my opinion, there isn’t an Eagles album that doesn’t have its share of hidden treasures. In this case, it’s “Outlaw Man” (originally the second single), “Doolin-Dalton” and “Bitter Creek.” Though the album obviously has a pronounced country feel, the sophisticated harmonies and smart production suggest a hybrid of Byrds, Neil Young and Steely Dan: romantic, ragged and smug. I’ve had a similar reaction to other sepia-toned works like Tumbleweed Connection, Workingman’s Dead and Pretzel Logic. Concept albums are always a challenge because linear storytelling and songwriting pull the writer into two different directions. Do you write the music around the plot or hope that a plot takes shape through the music? Eagles put their talents on the table, cross their collective fingers and roll the dice that our familiarity with the outlaw archetype will fill in the gaps. And in fact Desperado looks beyond Bill Doolin to paint an everyman outlaw. The faithless woman, the final showdown, the studied gunslinger are archetypical elements that don’t appear to be part of the original Bill Doolin legend. Even in the confines of a cowboy album, Eagles show off a variety of styles. Listen to “Out of Control” trample over the ending of “Twenty-One,” and it’s like hearing the country and rock factions of Eagles at war with one another. We know which side eventually won that battle, but at the time Eagles appeared to be the second coming of The Byrds. Today, the legend of Desperado lives on as a paean to past outlaws, a memorial from the new gunslingers to the old.