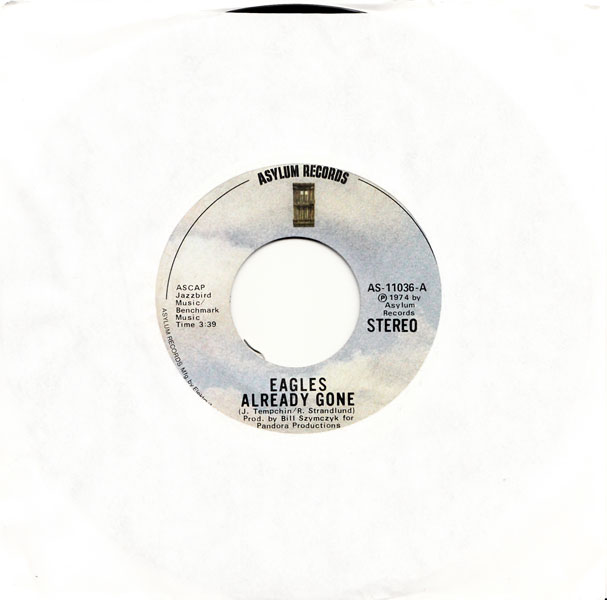 Eagles tapped peaceful, easy Jack Tempchin for another hit single, and he responded with one of the great kiss-off songs of all time.

As I’ve doubtless pontificated at some point in our interlexualsection, this is one of the great kiss-off songs of all time, here in its seven-inch incarnation with the songwriter Robb Strandlund accorded the high honor of having his last name spelled correctly. (It was spelled “Strandlin” on the US elpee version.) I carry such errors over intact (on cracking back) since I (and some days I alone) feel there’s historical significance in vinyl, the original synthetic drug of choice, and singles sometimes in particular since (as in this case) they were the edited ambassadors of a longer album entry or, if you prefer, diminutive doppelgangers.

I actually own a black t-shirt that says “Ask Me About My 7 Inches” which I wear on days when I’m feeling Randi (rim shot cymbal crash), those days being (mercifully) few and far between. (At one point, Poseur Ink used a female model for the shirt, which was much funnier than they likely intended, although I believe Dixie Chicks is still the tranny tee of choice.) Anyway, easing back into the flight path of Eagles, this is the second time that Eagles tapped Jack Tempchin for a hit, “Peaceful, Easy Feeling” being the first. The single version runs about a half-minute shorter than the elpee version; after a few listens, it sounds like they just faded the ending earlier.

Oh, and if you’ve recently broken up with someone, other songs that will make you feel better are: “It’s All Over Now” by The Rolling Stones, “I’m Free” by The Who, “Most Likely You Go Your Way (And I’ll Go Mine)” by Bob Dylan and “Somebody To Love” by Queen. You’re welcome.