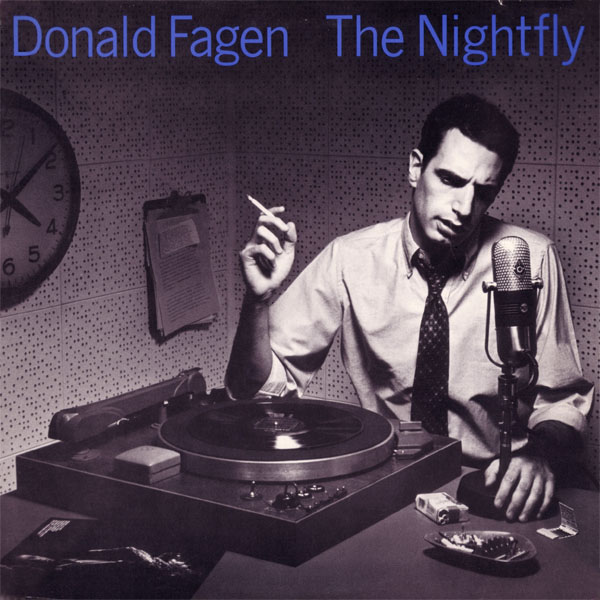 Donald Fagen released The Nightfly two years after Steely Dan’s last record, Gaucho, quelling for the moment questions of whether there would be life after Dan. While stylistically similar to Gaucho (many of the same session players appear on both), The Nightfly is lighter on its feet; a sense of optimism (!) also pervades the record.

The songs are based on Fagen’s own recollections of his youth, at a time when Tin Pan Alley celebrated the past and jazz looked to the future. The Nightfly straddles these two styles remarkably well: “New Frontier” and “I.G.Y. (International Geophysical Year)” take a comic look back at a forward-thinking time, while “Walk Between Raindrops” is a fine re-creation of American optimism. The arrangements are less exotic than Aja, less moody than Gaucho, now minus the extended guitar solos and intoxicating bass lines that Walter Becker brought to the table.

Of course, The Nightfly still recalls Steely Dan more than anything. Even the themes are sometimes strikingly familiar, as when jazz fills in the holes left by love on “The Nightfly” (nods to “Deacon Blues”), and the South American politics of “The Goodbye Look” (similar to “Sign In Stranger”). Not everything here is top-shelf stuff; the Leiber-Stoller oldie “Ruby Baby” sounds half-hearted, while “Green Flower Street” is no more memorable than Gaucho’s dry bits. But at its best, as on “I.G.Y.,” “New Frontier” or the tender and languid tale of young love, “Maxine,” The Nightfly soars.

Songs composed and arranged by Donald Fagen unless noted.