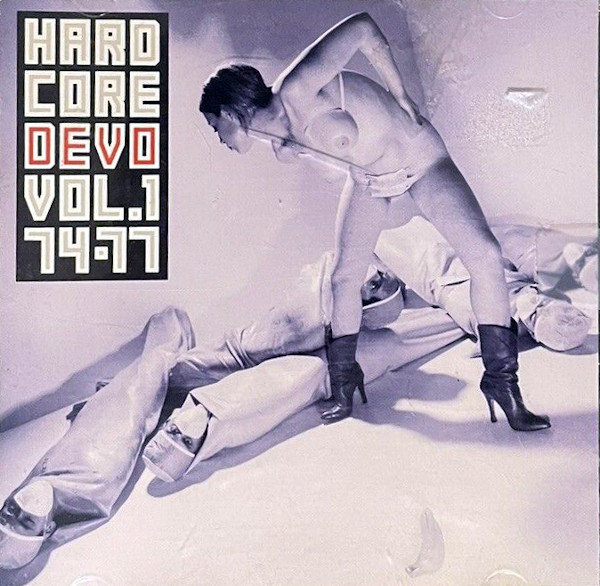 If I could travel back in time and change one moment in history, I would sign Devo to a record contract in 1975 and accelerate our de-evolution. I’d leave Adolf Hitler and Mark David Chapman to the other time travellers who don’t understand you can’t stop the crazy, you can only speed it up.

Hardcore Volume One collects early Devo demos that prefigure their first album with Brian Eno. Listening to this music today, it’s tempting to imagine what might have been. Instead of “New Rose” and “God Save the Queen,” the punk revolution might have started on our own soil with “Jocko Homo” and “Uglatto.” I’m not saying that Devo was the only band making music like this; that would mean erasing Brian Eno, Sparks, John Cale, Captain Beefheart and a whole bunch of other important figures from history. But those artists were approaching their art from a largely intellectual perspective (well, who knows where Beefheart was coming from…), while Devo is approaching it from a primal one.

The songs are driven by the Id: sex, shame, survival. At the same time, the early music of Devo makes you think. With the simple twist of one word, Devo can turn robot slaves into a robot army (“Mechanical Man”), or turn our own minds against us (“Social Fools”). I’m not the first person to point out that de-evolution doesn’t end pretty, but it started out beautifully. You know you’ve been hankering for a second helping of “Satisfaction” ever since you heard it. Hardcore Volume One is a cold banquet for the starving masses. Dig in and devolve all over again.