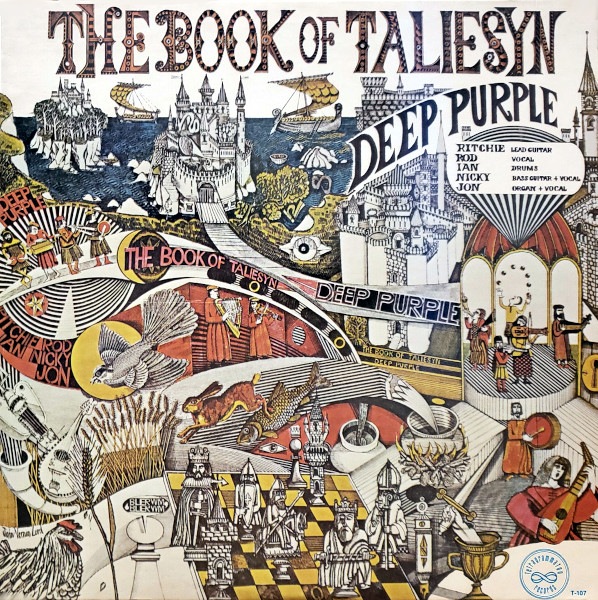 Pushed to release a second album quickly, Ritchie Blackmore and Jon Lord promptly came up with this proggy effort.

A hastily conceived followup to Deep Purple‘s first album was recorded to capitalize on their newfound success. The Book of Taliesyn, named after a bard of Arthurian legend, should have exposed myriad holes. Instead, it exposed listeners to a more progressive side of Purple that showcased fantasy (“Listen, Learn, Read On”), classical music (“Anthem”) and prog majesty (“Shield”). It was an explosive cover of Neil Diamond’s “Kentucky Woman” that became the album’s hit single, although I would tell you it’s the least interesting thing on here. A heavily edited version of “River Deep, Mountain High” fared well as the album’s second single; as with their cover of The Beatles’ “We Can Work It Out,” the most interesting music occurs in the classically influenced intros and instrumental solos.

Despite the short distance since their debut, The Book of Taliesyn is a confident step forward in songwriting. “Shield” is as good as anything to come from the pens of Jack Bruce and Peter Brown, while the guitar solo from Ritchie Blackmore is head and shoulders above his work on Shades. With more time, the band might have found a better vehicle than Diamond’s “Kentucky Woman” or replaced the instrumental “Wring That Neck” with a proper song; other than that, though, the band could have released this album a year later without anyone being the wiser (which, if memory serves, is exactly what happened in the UK). The Hendrix/Who-isms have been toned down, and even the influence of Vanilla Fudge is hard to detect here (although debts to Procol Harum and The Moody Blues are more evident this time). As one of the earliest examples of progressive rock, The Book of Taliesyn is an important work. It’s not a masterpiece, but like Curved Air’s second album the demands of writing more material quickly seem to have spurred them on to higher heights.

* That’s what it says on the record label.