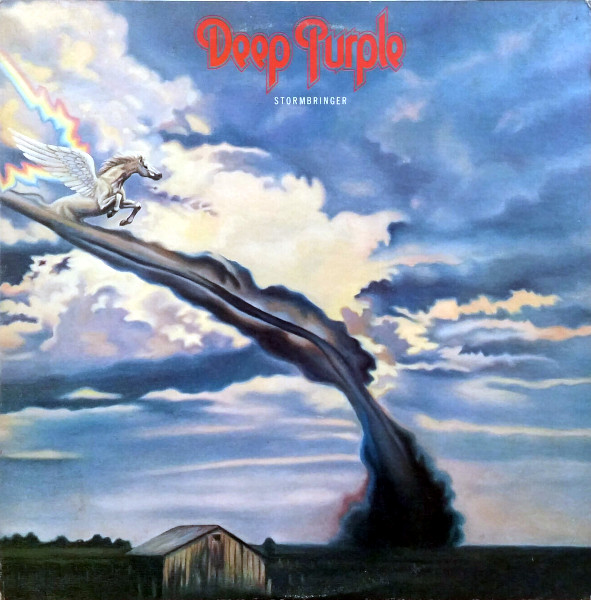 The final album before Blackmore went in search of his own Rainbow, this marks the end of an era.

This was the first Deep Purple album I bought… and nearly the last. At the time (the early 80s), I was into punk and prog and expecting something like Sabotage. Instead, this was hard rock with a heavy blues-funk edge and a Pegasus on the cover, which is only slightly less gay than a unicorn. I listened to Stormbringer a few times, put it back in its Pegasus sleeve, and figured those Deep Purple fans didn’t know what they were talking about.

Of course, ten Purple albums later, I have a deeper appreciation of Stormbringer for what it is: the last of the Mk. III albums to feature Ritchie Blackmore. The opening Stormbringer continues the proud lineage of head-banging, throat-busting heralds in the Purple family, and there really isn’t a bad song in the bunch. There are a few more rockers (Lady Double Dealer, High Ball Shooter), some pretty catchy melodies (Love Don’t Mean a Thing, You Can’t Do It Right) and moments of Heepish mysticism and majesty (Holy Man, The Gypsy, Soldier of Fortune).

Now, that said, each Mk. III album seemed a step closer to rock & roll mediocrity than the last as the elements of blues and funk became more pronounced. Also, this album wastes one of the world’s best rock & roll drummers, Ian Paice, about half the time. Despite his criticism of the album, Ritchie Blackmore seems inspired by the material, David Coverdale sings it very well (often with Glenn Hughes riding beside him) and Jon Lord gets his funk on. Martin Birch shares the production credit this time, while Paice had a hand in the final mix (seeing as how he didn’t need two of them for these beats).

If this is the worst Deep Purple album so far, and it may be, it’s still better than most Uriah Heep records. That’s not exactly resounding praise, I realize, but I’ve certainly warmed up to this album over the years. It turns out the Deep Purple fans knew something I didn’t: that Stormbringer is part of a broader legacy that has brought the heavy metal thunder and then some since 1970.

Original 8-track version
A1. Stormbringer
A2. Hold On
B1. Lady Double Dealer
B2. You Can’t Do It Right (With the One You Love)
B3. The Gypsy (beginning)
C1. The Gypsy (conclusion)
C2. Love Don’t Mean a Thing
C3. Soldier of Fortune
D1. Holy Man
D2. High Ball Shooter