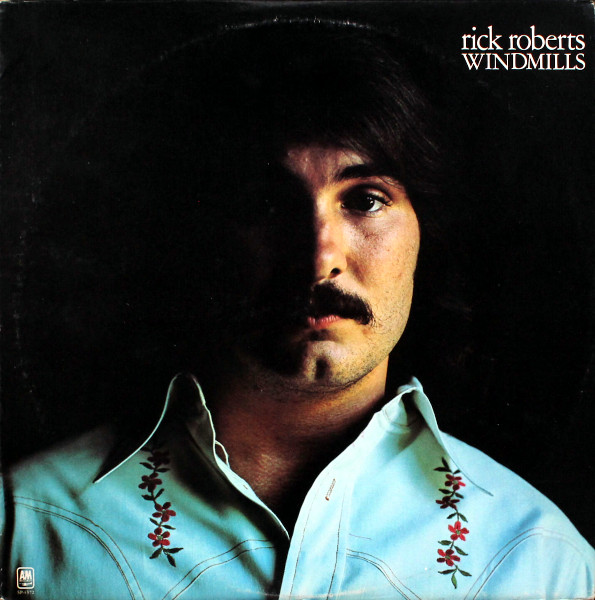 A breezy album of country-rock from the former Flying Burrito, now in the company of Eagles.

Kronomyth 1.0: When the apple blossoms bloom in the windmills of your mind.

The hot new Burrito didn’t stick around for very long, leaving after one album (The Flying Burrito Bros) to strike out on his own. Rick Roberts was the best part of the Burritos’ last record and he continues to impress as an up-and-coming country-rock singer/songwriter on Windmills. Produced by David Anderle (who also produced Mother Hen’s eponymous album from the previous year) and featuring a who’s who of country-rock stars including three Eagles, two Burritos and two members of CS&N, Windmills is the kind of breezy endeavor that forecasts smooth sailing for the future.

Roberts has a good voice (sometimes reminiscent of James Taylor) and an ear for mellow country-rock. His first album arrives at more or less the same place as Chris Hillman’s debut, Slippin’ Away; not surprising, since many of the same players are involved. You have the tasteful pedal steel of Al Perkins, the occasional fiddle of Byron Berline and the percussion of Joe Lala on both records. There are also some impressive vocal cameos on Windmills, including harmony vocals from David Crosby (In a Dream), Jackson Browne (Drunk and Dirty), Jane Getz (Pick Me Up On Your Way Down) and Don Henley (Davy McVie).

What’s missing on Windmills is a standout single. Honestly, Roberts’ material on the last Burritos album (“Colorado,” “Why Are You Crying”) was better. Deliver Me isn’t a bad song, but in a crowded market and with a name like Rick Roberts, it would take more than a middle-of-the-road country-rock song to make him a star. And, so, what you’re left with is a pleasant album with some pretty songs from a fresh face and some familiar faces behind it. Windmills isn’t the breakthrough debut I would have predicted after hearing The Flying Burrito Bros. Still, it’s solid enough that I’m interested in hearing more from Rick Roberts.

All songs written by Rick Roberts unless noted.