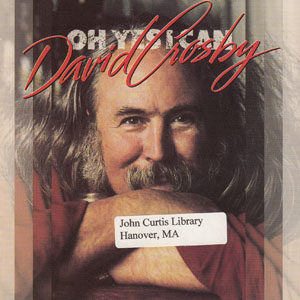 [Kronomyth 2.0]
Still Crosby After All These Years.

The 80s for David Crosby kind of sucked it as decades go. There was the heroin bust and subsequent prison time (1982), the drunk driving hit and run (1985) and CSN&Y’s American Dream (1988 and arguably the greater of the three crimes). So the decision to release his first solo album in almost 20 years in 1989 must have elicited a reflexive flinch from even his own fan base. And yet Oh Yes I Can is actually a pretty good album. Crosby and the usual suspects (Craig Doerge, Russ Kunkel, Joe Lala, David Lindley, Danny Kortchmar) put together the kind of record you would have expected from the man BEFORE all of the arrests and innuendo. Crosby’s voice is in better shape that I expected and his songwriting is solid: “Oh Yes I Can,” “Lady of the Harbor,” “Tracks In The Dust” and “Drive My Car” prove that the man still has something to say. He also gets some help from friends like James Taylor, Michael Hedges, Graham Nash, John David Souther, Jackson Browne and Bonnie Raitt; people like that are either going to show up for a funeral or a good album, and it’s the latter this time. Like his first solo album (the name of which escapes me at the moment), Crosby mixes cranky rock songs with complex harmonies, a mixture of earth and sky. After the last couple of Zombie, Stills & Nash albums, Oh Yes I Can is the affirmation that Crosby was alive and, well, still capable of making good music. Honestly, at this stage in his career a pulse would have been considered a comeback, so we’ll call it a welcome back instead.