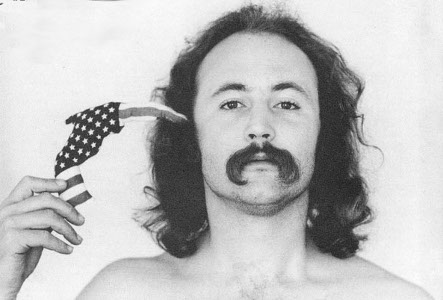 The iconic David Crosby has the distinction of being a member of two of the greatest American rock bands of all time: The Byrds and Crosby, Stills & Nash. Unfortunately, since then he’s probably spent more time in rehab and prison than the recording studio, and his own legacy consists of an abortive solo career, a few mediocre alliances with Graham Nash and the latter-day CPR in which Crosby reunited with his biological son, James Raymond.

About once a decade, David Crosby begs off his quest to repopulate the planet just long enough to release a solo album and then it’s back to the (head)boards. Lord knows I’ve been buying his solo albums when I can in an effort to keep him in the studio more, but I’m just one person. If you wake up fifty years from now and find the world populated by man-walruses, you only have yourselves to blame.

And of course I’m only kidding. I don’t really think it will take fifty years.

VOYAGE (2006)
Eight Miles High / Renaissance Fair / Everybody’s Been Burned / Wooden Ships / Guinnevere / Long Time Gone / Déjà vu / Almost Cut My Hair / Tamalpais High (At About 3) / Laughing / Music Is Love / Song With No Words (Tree With No Leaves) / What Are Their Names / I’d Swear There Was Somebody Here / Where Will I Be / Page 43 / Critical Mass / Carry Me / Naked In The Rain / Dancer // Shadow Captain / In My Dreams / Delta / Compass / Tracks In The Dust / Arrows / Hero / Yvette In English / Rusty And Blue / Somehow She Knew / Breathless / Map To Buried Treasure / At The Edge / Through Here Quite Often / My Country ‘Tis of Thee // Long Time Gone / Guinnevere / Almost Cut My Hair / Games / Déjà vu / Triad / Cowboy Movie / Kids And Dogs / Have You Seen The Stars Tonite / Lee Shore / Traction In The Rain / King of the Mountain / Homeward Through The Haze / Samurai / Climber / Dream For Him. Released as three-CD boxed set on November 21, 2006 in the UK (Rhino, 77628).

SELECTIONS FROM DAVID CROSBY: VOYAGE (2006)
Long Time Gone / Guinnevere / Everybody’s Been Burned / Almost Cut My Hair / Laughing / Carry Me / Tracks In The Dust / Yvette In English / Breathless / Cowboy Movie / Climber. Released on promotional CD in 2006 in the US (Rhino, PRCD-400164).