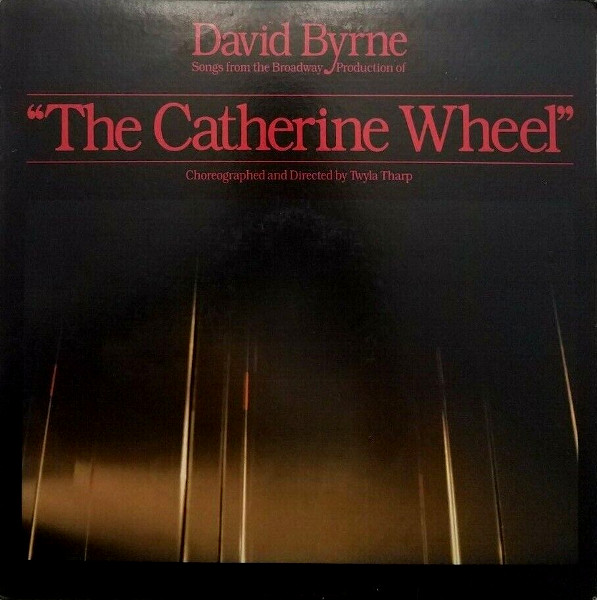 This is probably the most fun you’ll ever have listening to a ballet score.

Kronomyth 2.0: Go ahead, fill their heads with poison.

During Talking Heads’ hiatus, David Byrne turned the idea of “music you can dance to” on its head by providing the score to Twyla Tharp’s ballet, The Catherine Wheel. The music is herky-jerky, minimalist, mesmerizing, and more or less what you’d expect from the auteur of Remain in Light and My Life in the Bush of Ghosts, only stripped down (or at least wearing a few less layers). I tend to see this album as the third of an arty trilogy, the aforementioned pair being parts one and two, with the caveat that Brian Eno’s part-time participation makes it the least interesting of the three.

The original elpee version of The Catherine Wheel features selections from the score, not surprisingly the better tracks. Eventually, the entire score was made available on compact disc and cassette. Although there’s no harm done in picking up the complete score, you’ll get everything you need on the elpee. It’s here that you’ll find the new songs and the more fleshed-out of the instrumental works. Despite their origins in a ballet score, My Big Hands, Big Blue Plymouth, What a Day That Was, Poison, His Wife Refused and Big Business are basically the new batch of songs from David Byrne. The instrumentals either favor the mixed media approach of My Life in the Bush of Ghosts (Eggs in a Briar Patch, The Red House) or the ambient style of Music for Films (Cloud Chamber, Light Bath).

In some ways, The Catherine Wheel is David Byrne’s most overtly avant-garde work to date. It’s also his most rhythmically informed album, featuring two full-time percussionists, Yogi Horton and John Chernoff. Byrne handles most of the musical duties with contributions from a familiar circle of players (Brian Eno, Adrian Belew, Dolette McDonald, Steve Scales, Bernie Worrell). As to whether it offers a glimpse into what life after Talking Heads would look like for Byrne, the answer is yes and no. His later albums were more commercially geared and took on less of a DIY approach, though still chocked full of invention. And, yet, this may be Byrne’s most transparent work. If you’re interested in what makes him tic, consider this your invitation to the dance.

Original cassette and compact disc version
A1. Light Bath
A2. His Wife Refused
A3. Adé
A4. Walking
A5. Two Soldiers
A6. Under the Mountain
A7. Dinosaur
A8. The Red House
A9. Wheezing
A10. Eggs in a Briar Patch
A11. Poison
A12. Cloud Chamber
A13. Black Flag
B1. My Big Hands (Fall Through the Cracks)
B2. Combat
B3. Leg Bells
B4. The Blue Flame
B5. Big Business
B6. Dense Beasts
B7. Five Golden Sections
B8. What a Day That Was
B9. Big Blue Plymouth (Eyes Wide Open)
B10. Light Bath

3 thoughts on “[Review] David Byrne: Songs from the Broadway Production of “The Catherine Wheel” (1981)”