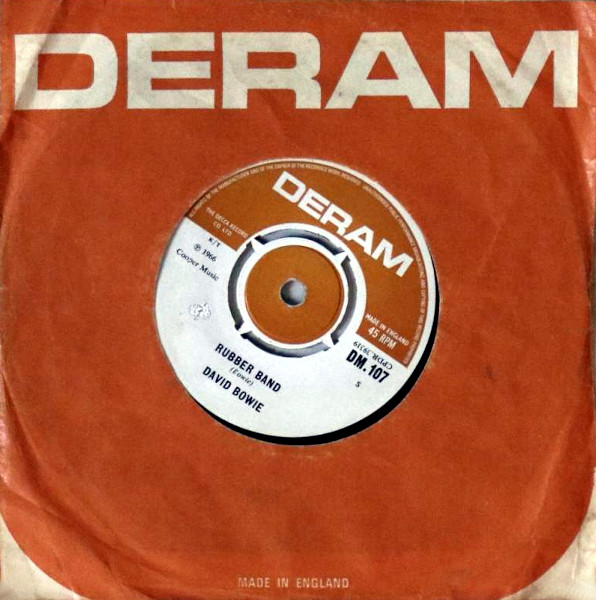 Before the chameleon there was the elastic man, here in the role of Anthony Newley’s understudy.

Kronomyth 0.7: You’ve never heard a sound like the rubberband man.

David Bowie’s first single for Deram was a clever bit of playacting called Rubber Band. The song’s narrator returns from the first world war to find he has lost his love to the leader of a brass band, and loudly laments the fact against the backdrop of said band. Quite a few of Bowie’s songs for Deram were “staged” songs like this, featuring Bowie singing in an affected English voice amidst an imaginary scene, as if auditioning for the next Anthony Newley film.

The B side for the original UK single was The London Boys (in an interesting twist, spelled “Boy’s” on the single), a cautionary tale about leaving home for the illusory lights of the city. Although Bowie was still finding his voice, literally, you can hear the sound of good things to come on the chorus. Both tracks feature horns; “The London Boys” features less of them and gives prominence to the organ. Bowie largely abandoned this musical style before recording his second album, but you can draw a line between “The London Boys” and “Saviour Machine” if you allow for a few abstruse angles along the way.

When it came time to make his first album, Bowie recorded a new version of “Rubber Band” that polished up the brass section and vocals a bit and included the line “I hope you break your baton” at the end. This version was released as a single in the US along with the album track, There Is A Happy Land. “Land” is one of several early songs where the artist takes up the cause and/or persona of a child (cf. “When I Am Five”). Neither single made any impact, despite the fact that you can now find an “official” video of the song on YouTube, which is actually taken from the unreleased 1969 promotional film, Love You Till Tuesday.