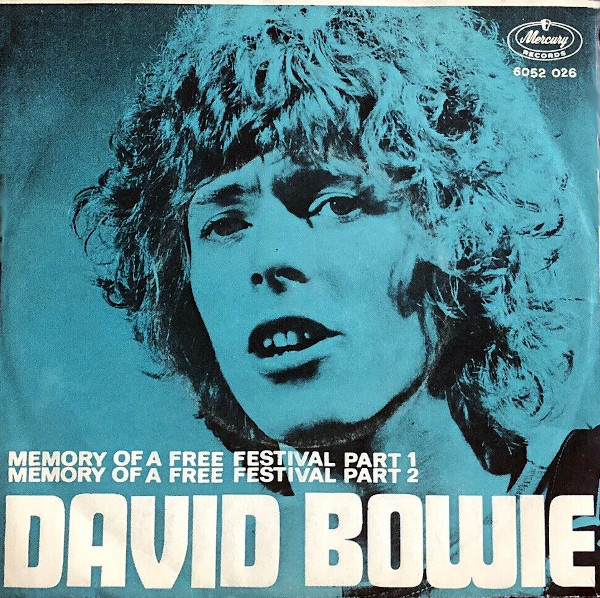 The hippy-trippy closer on Bowie’s second album gets a new haircut, but no one paid attention.

Kronomyth 2.5: Parting is such sweet sorrow.

I don’t know whose idea it was to re-record “Memory of a Free Festival” as David Bowie’s next single, but that person probably should have been sacked. Hiring Mick Ronson, now that was a brilliant idea. The electrified, glam-orized version of Memory of a Free Festival (Part I) is far more interesting than the original version, don’t get me wrong, but I can’t imagine Bowie didn’t have an unfinished song lying around somewhere that would have turned out better (e.g., “Conversation Piece”).

With a backing group briefly billed as The Hype featuring Ronson on lead guitar, Woody Woodmansey on drums and producer Tony Visconti on bass, “Memory of a Free Festival (Part I)” is a foretaste of the electrified future that would appear on The Man Who Sold the World. In fact, the song feels like a test run for “Black Country Rock.”

For the B side, Bowie simply extended the already-long original coda into a self-standing structure that topples over anyway. Not as cheesy as Traffic’s “Gimme Some Lovin’ Part Two” but pretty close. Perhaps predictably, the single didn’t win any new converts or interest the radio stations who were looking for another “Space Oddity.” The two parts together produce the effect of listening to the single on a miniature 8-track, with the ending of Part I and the beginning of Part II overlapping.

The original track times (listed below) are substantially shorter than the actual run times. I think I read somewhere that one of the single versions featured an edited intro, although I’m too lazy to look for it now. At any rate, both parts usually run around seven minutes (i.e., close to the original elpee version).