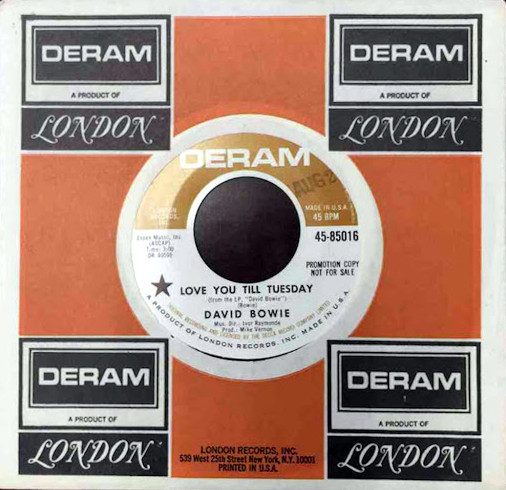 Kronomyth: 1.1: Is it ow-only me, or is this version better?

I always found the album version of Love You Till Tuesday cloying, and maybe Mr. Jones did too. Whatever the reason, he re-recorded it for this single released shortly after his first album. The new version features a nice orchestral arrangement from Ivor Raymonde (of Dusty Springfield fame) and a new vocal track that avoids the sickening accent of “only me” on the original, two words that still stand up the hair on the back of my neck like fingernails on a blackboard.

The B side is Did You Ever Have a Dream, which didn’t make it onto David Bowie’s first album but is just as good as anything that did. It would have been a nice vehicle for Herman’s Hermits and at least partially justifies the Peter Noone haircut. Honestly, Bowie’s singles had grown better over time and, while none of them can hold a candle to “Space Oddity” and what followed, you can hear why some fans hold a torch for them to this day.