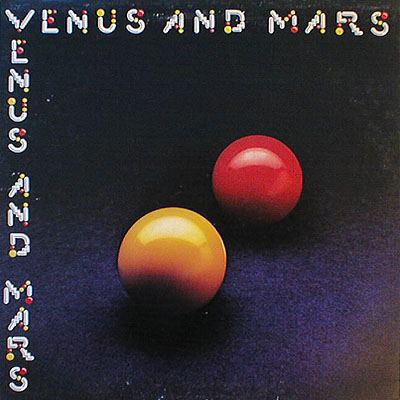 Venus and Mars is more than alright, although Band on the Run shone brighter.

In 1975, when this album was released, my knowledge of the unkindness of the world was provincial, relegated to a handful of grotesque characters, bullies of the old and young varieties. As all adults who move within the world, I am today a connoisseur of unkindness. So if I view some of the songs on Venus And Mars unkindly, it is the product of an unkind mind. As a 10-year old boy, this album and all Paul McCartney albums were treasure chests waiting to be opened.

First, the nasty business of putting this album in its place. It is worse than Band on the Run, better than Wings at the Speed of Sound, and most like Red Rose Speedway in its surfeit of musical ideas. The opening “Venus And Mars/Rock Show” is another epic cut-and-paste job, tailor-made for the worldwide tour to come. The rest of the record, unfortunately, plays a game of push and pull. The listener is repelled by maudlin love songs (“Love In Song”) and noisy bits from people not named Paul (“Spirits of Ancient Egypt,” “Medicine Jar”), only to be lured back by charming love songs (“You Gave Me The Answer,” “Listen To What The Man Said” and the quite literal “Call Me Back Again”). It’s an uneven experience, perhaps a reflection of the band’s internal growing pains as they tried to find a workable quintet (original drummer Geoff Britton having quit in mid session).

At the time, I thought it was a wonderful record. Wings at the Speed of Sound only had the two good songs on it (ah, but what songs they were!), while a young boy might champion any number of tunes from Venus And Mars, especially the cartoonish “Magneto And Titanium Man.” The difference between Band and everything else that Paul has done lies in the skipping. On a Paul McCartney record, I invariably skip to the best parts, but on Band I simply let it play through. On most days, I’m inclined to skip past “Love In Song,” “Letting Go,” “Spirits of Ancient Egypt,” “Medicine Jar” and everything after “Listen To What The Man Said.” The other half of Venus And Mars, however, has yielded many hours of pleasure.

If this review is more about me than McCartney, it’s because Venus And Mars is an album I associate with deeply. New albums by the ex-Beatles were a source of mystery and delight to me, and a reassurance that the powers that be held the Beatles in high esteem, which was as clear an indication of goodness as a 10-year-old might wish. I no longer suffer the illusions of youth, yet Venus And Mars is a reminder that beauty (venus) and brutality (mars) are a matter of perspective, and I weep for the lost vistas of Venus.