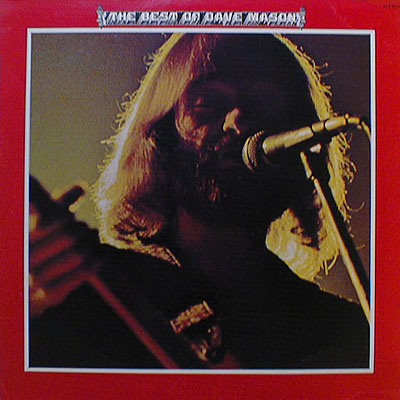 This is the first of many, many shameless, needless Dave Mason compilations. After a short and tenuous relationship, Mason bolted Blue Thumb for the greener pastures of Columbia. Blue Thumb had already released two albums without Mason’s permission (Headkeeper, Alive), so what was left but to package up the best bits from his two-and-a-half studio albums with the label as a premature greatest hits record? Sandwiched in between his first and second studio albums with Columbia, The Best of Dave Mason collected four tracks from his first album (Alone Together), two from his second album with Mama Cass and three from the studio half of Headkeeper. Generally, these kinds of compilations contain the tentative early material that history has forgotten, but not so here. In fact, Blue Thumb’s The Best of Dave Mason does contain a lot of his best work: “Walk To The Point,” “Only You And I Know,” “Shouldn’t Have Took More Than You Gave,” “To Be Free,” “Look At You, Look At Me.” Honestly, you could make the case that the best of Mason’s post-Thumb output could be confined to a couple of tracks from Let It Flow (“We Just Disagree,” “Let It Go, Let It Flow”); tack those two tracks onto these nine, toss in a couple of tracks from his other Columbia albums and you’ve got a perfectly respectable career compilation. Mind you, I’ve never encountered a respectable Mason compilation, and the slightly altered Dave Mason At His Best, which Blue Thumb released the following year, certainly wouldn’t fit that description. If you really want the best of Mason, buy Alone Together, Let It Flow and the first two Traffic albums.

All songs written by Dave Mason unless noted.

The Players
Although this is all previously released material, the album credits Tommy LiPuma (co-owner of Blue Thumb Records) and Dave Mason as producers and Al Schmitt as engineer.