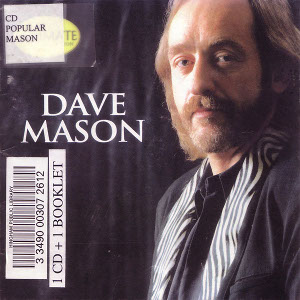 [Kronomyth 16.3]
Haven’t we ultimate before?

Hip-O Records has released some excellent compilations over the years and this isn’t one of them. The double-disc Gold treatment showered on Pete Townshend—now that’s how it should be done. Instead, Ultimate Collection lingers too long at Alone Together, ignores important singles like “Will You Still Love Me Tomorrow” and “Save Me,” and digs into Traffic’s tomb for three tracks. The Traffic stop doesn’t bother me so much as, say, putting a Who song on a Townshend compilation (which Hip-O wisely avoided on the aforementioned Gold), because the early Traffic albums were essentially combined solo albums by Mason and Winwood. I’m sure the world wouldn’t end if a Dave Mason compilation didn’t contain “Feelin’ Alright” either. The most egregious error anyway is the inclusion of “Two Hearts” at the end. Maybe the temptation to reconcile Mason with his past was too strong, but the title track from his 1987 album ends the disc on a sour and disjointed note. Mason is further confined by chronology on Ultimate Collection; I think the disc would have benefited by spreading the early, sweet stuff around. Working a song like “Baby… Please” or “Satin Red And Black Velvet Woman” sooner into the mix would have shaken things up nicely and, as was the case with Townshend’s Gold, added some much-needed contrast to his earlier tracks. No complaints with the liner notes (William Ruhlmann is alright in these parts) or the generous 17-track helping from a single platter. Ultimately, though, this is just another in a long line of underwhelming Dave Mason collections, one that inexplicably ignores entire albums like Old Crest, Split Coconut and Mariposa (Some Assembly really isn’t required).

All songs composed by Dave Mason unless noted.